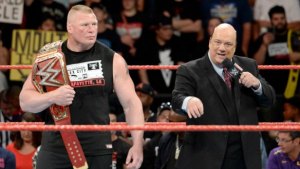 Brock Lesnar was back on television this week for the first time since Wrestlemania week, with the Universal Championship across his shoulder. Anytime Brock is on television it’s a big deal. Now that he’s got a Heavyweight Title again, that’s the case even moreso.

Nowadays we’re hearing a lot of the same talk we heard during Brock’s last run with the WWE Championship. He needs to be on TV more, not having him there takes away from the show, things like that. And yes, not having your champion there is a big adjustment. That title is usually what everyone is fighting for. It’s the motivation for most of the main characters on this TV show.

But they’re doing the right thing with Brock Lesnar, champion or not.

Brock is special. That was the case even before he became UFC Champion and all that. Now he’s one of the precious few difference-making attractions WWE has. So when Brock is on Raw, sparse as it may be at times, it’s special. It’s must-see TV. That shouldn’t change because he has the title.

The impetus, therefore, needs to be on WWE to provide us with compelling television despite the lack of a Heavyweight Champion. As we’ve seen in recent weeks, they haven’t consistently done that. But there are bright spots to be found. They’ve reintroduced certain mystery and soap opera elements that have been absent for awhile. The mystery of who’s attacking Enzo and Cass, the question of what’s going on with Kurt Angle, etc. They’ve got so many talented people on that Raw roster. The absence of your champion is a circumstance, not an excuse.

There’s also something to be said for restraint. Before the so-called Monday Night Wars, you didn’t see all your marquee stars in the ring every week. The announcers would talk about them, and you might see an interview. But they wouldn’t necessarily wrestle every week. Once WWE started fighting for ratings, that all changed. WWE would benefit greatly from not throwing everything and everyone at us each week. Yes, they have three hours to fill. But again, that’s not an excuse. It’s a call for them to be more creative.

What’s more, they’ve shown they can do it. Not just with Brock, either. Finn Balor hasn’t wrestled on Raw in two weeks. We saw a video package about him. But they kept him off the live show. Roman Reigns got the same treatment this week. Ergo, they’re a little bit fresher the next time we see them.

Ergo, despite what you might hear, Brock Lesnar’s less frequent appearances are an example of what WWE is doing right these days. Frankly, the anticipation and freshness they help create is something they should strive for with more of their main event talent.

A brawl erupts between Brock Lesnar and Samoa Joe. There was a definite tension in the air when Brock and Paul Heyman came out. A tension which grew thicker with Heyman’s promo, and then even thicker when Joe finally came out.

What followed was a pull-apart brawl very reminiscent of the one we got between Brock and the Undertaker a few years ago. I’m disappointed they couldn’t come up with something different. But the two things I came away from this thinking about were Joe’s opening shot to Lesnar, and the kick he snuck in. They came off pretty evenly matched, but Joe was the one who got put over. In the end, this accomplished what it needed to.

Elias Samson def. Dean Ambrose after a distraction from Miz and Maryse. Wonder how many of the kids at home got Corey Graves’ Bobby Boucher reference…

Decent match. Nice to hear the crowd get into it. That’s not always what we get with some of these Raw crowds. This Ambrose/Miz thing needs to be over already. Between Raw and Smackdown, we’ve been seeing it for months now. Give us a fresh IC Title challenger, and let Ambrose work with Samson long form.

Afterward, we saw Kurt Angle get angry at Miz backstage. So…the GM was mad that a wrestler interfered in another wrestler’s match? He does know what show he’s in charge of, right? 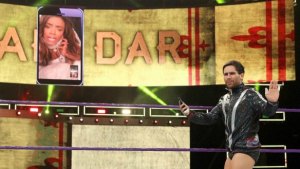 Cedric Alexander def. Noam Dar. The tried a new story device here by putting Alicia Fox on the tron, framed inside an image of a phone (shown right). The idea was she was using FaceTime or something. They really should have set this up beforehand. Like, in the backstage segment we saw prior, have Dar tell Fox he’s going to put her up on the tron so people can still be treated to her beauty. Something like that. The transition was jarring. At least the match was short.

Roman Reigns to make an announcement regarding Summerslam next week. I like this. It seems pretty open-ended as far as who Reigns will be working with. So it could be just about anybody. It’d be nice if we could just do Reigns vs. Lesnar, and get it out of the way now. I expect we won’t be that lucky. Braun Strowman, maybe? I know he’s a Smackdown guy, but could it be John Cena? If so, it would make sense for them to start promoting it now.

Bray Wyatt and Seth Rollins come face-to-face in the ring. They must have used an old bumper for the backstage portion of Bray’s promo. There were some images of Randy Orton in there.

News broke yesterday about Bray’s wife filing for divorce, citing an alleged affair with ring announcer Jojo Offerman. I’m not defending what the real-life Wyndham Rotunda supposedly did. But it sucks whenever one’s dirty laundry gets aired like that. My heart goes out to the family.

Bray said, “You don’t want this fight, Seth. My power is more than you can possibly imagine.” Oh really? You lost clean to Roman Reigns last week. Also, you and Rollins have wrestled before, including in the main event of Raw not long ago. So yeah, I’m pretty sure he can imagine just fine.

Bray’s little disappearing act during this segment was very Undertaker-ish. He then said another line that made no sense: “Face your fear, man….and run.” Face your fear and run? What the hell does that mean?

Apollo Crews def. Kalisto. Titus O’Neil continues to try and recruit Akira Tozawa to the Titus Brand. Nice powerbomb finish to an okay match. I’d expect to see Titus, Apollo, and Kalisto start showing up on 205 Live to further this story. If they haven’t already, that is. Like most people, 205 Live isn’t much of a priority for me.

Sasha Banks, Mickie James, and Dana Brooke def. Alexa Bliss, Nia Jax, and Emma. Emma caught a really bad break with an injury shortly after she finally got back in the ring. So it was cool to see her return. Then of course, she tapped out. Some people just can’t catch a break.

Corey Graves does a sit-down interview with Bayley. After not being able to use the kendo stick on Alexa Bliss at Extreme Rules, Bayley says she’s going to do things “her way” regardless of what people think. That’s a nice sentiment, and it’s very in-character. I just hope that after the bad booking Bayley has had to endure, the older fans don’t turn on her for being a white-meat babyface. I’m interested to see what kind of reaction she gets the next time she’s in front of a TV crowd.

Heath Slater and Rhyno def. The Miz and “Bear.” Well great. The crowd was chanting for the bear. Now we’ll be seeing the Miz in segments with it for weeks to come.

So Miz unmasks the bear, and it’s not Ambrose. Then a second bear comes in, and it is Ambrose. They seemed to lose the crowd at that point. Apparently Miz’s tag team partner being in a teddy bear costume was okay. A sudden costume switch? Not okay.

If they’re looking for someone for Miz to feud with, I wouldn’t mind seeing Slater get that spot. He’d make a great underdog challenger.

Neville lays out Rich Swann before their match can begin, advices Akira Tozawa to “tread carefully.” I’ve been waiting to see Tozawa and Neville mix it up since the former first appeared on Raw. I’m ready for this!

Big Cass is once again attacked backstage. Luke Gallows and Karl Anderson defeat Enzo and Cass moments later. The Big Show comes to Enzo’s aid afterward. I’ll give them credit. I’m more interested in this story than I ever thought I would be. The big question seems to be about who’s going heel? Is it Enzo or Cass? I still don’t think they should be broken up. But it seems like that’d be the only worthwhile payoff…

Sheamus and Cesaro vs The Hardy Boyz go to a double count-out in a 2 out of 3 Falls Match for the Raw Tag Team Titles. Love the positioning of this match. Really made the titles feel important. It’s also a break from the usual suspects being in the main event. Reigns, Rollins, etc.

Sheamus and Cesaro have been put over like a million bucks these past few weeks. First they pin everyone in a Tag Team Turmoil Match. Then they win the belts at Extreme Rules. Now the Hardys fail to beat them for the belts in a 2 out of 3 Falls Match. They may not have won here, but they are believably and definitively positioned as the top team on Raw right now. Maybe the top team in all of WWE. Good on you, gentlemen. Looking forward to seeing where it goes next.