This week I stumbled across a story in USA Today about Supergirl‘s audience thus far. The article cites Nielsen statistics which say Supergirl draws a 51 percent male audience. Naturally, the other 49 percent is female. That’s huge for a superhero show. Granted, it’s not that far ahead of Agents of S.H.I.E.L.D., which draws a 53/47 ratio, or Gotham, which does 57/43.

Long story short, Supergirl seems to be doing exactly what people hoped it would: Bringing in female viewers. Needless to say, that’s a great thing.

Now, on to this week’s episode… 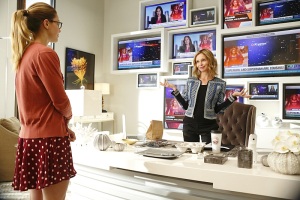 Cat Grant conducts a brief interview with Supergirl. I liked that Supergirl kept her distance from Cat here, which almost helps with my suspension of disbelief about the whole glasses disguise. Much like Superman and Clark Kent, it seems that’s one of those things fans are just going to have to live with.

The newspeg she went with was that Supergirl and Superman are cousins. I’m not sure why that’s such a big deal, quite frankly. It seems like common sense that they’d be related somehow.

Alex calls Kara out about liking Jimmy Olsen. At the risk of coming off like Jeb “Supergirl is pretty hot” Bush, Melissa Benoist’s awkward giggle is adorable. There’s that girl-next-door appeal we’ve talked about.

Winn sets up a secret office for Supergirl-related activities in the office. I call BS on this one. In an office full of reporters, nobody notices all that tech is there? And nobody ever goes into that room? C’mon, now.

Reactron makes Supergirl a pawn in his quest for vengeance against Superman. Reactron came off pretty well in this episode. The suit looked cool, and Chris Browning did a hell of a job when the mask was off. I’d love to see more of Reactron as the series progresses.

Superman saves Kara in her second fight with Reactron. Thus far, we’re striking a very delicate balance with Superman’s presence on this show. He’s obviously impacting the proceedings, and in this episode Winn even found out the Clark Kent secret. But we’ve never seen his face, and he has yet to actually become a full-fledged character on the show. So where do you draw the line? He saved Kara in the episode, and apparently they can instant message. But can she somehow talk to him on camera? Will they ever team up somehow?

We get our first look inside Maxwell Lord’s tech empire. It must be nice having people call you “Mr. Lord.” The guy already has a huge ego, but they you throw that in…

Lucy Lane, Jimmy Olson’s ex, appears on the show, played by Jenna Dewan-Tatum. Lucy Lane, Lois’ sister, tends to complicate things when she shows up. In the comics she did indeed date Jimmy Olsen, and for a time was actually the unstable Superwoman. In Lois and Clark, she dated John Corben before he became Metallo.

I expect more of the same here, especially with her coming between this odd Kara/Jimmy romance. I buy Jimmy more as Kara’s big brother than her love interest. Hopefully they’ll give this a little more time to develop, so it actually has some meat to it.

Image 1 from designtrend.com. Image 2 from superherohype.com. Images 3 and 4 from comicbook.com.