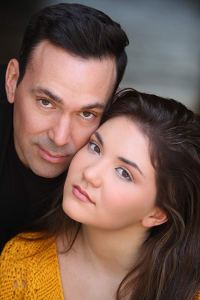 Is Jason David Frank’s daughter about to turn Power Rangers into a family business?

PopLurker.com stirred up the Power Rangers fandom Saturday morning, with the story: “Actress Jenna Rae Frank Rumored to Lead Power Rangers as the Next Red Ranger.”

Jason David Frank, of course, played Tommy, the Green Ranger, on Mighty Morphin Power Rangers in the early ’90s. He stuck with the show until 1997, returned for a season in 2004, and has done a few one-offs since then. He currently co-owns Power Morphicon Express, a traveling fan convention making its first stop next spring in Pasedena, TX.

Mind you, the article is only a “What if they did this?” fan pitch. It offers nothing in the way of evidence. But lets not be foolish enough to dismiss it outright.

For one thing, this is obviously something the Franks want. I suspect they were actually involved in getting the PopLurker story published, as it conveniently coincides with this “action audition” posted to 14-year-old Jenna’s YouTube page…

According to her IMDB page, Frank’s only on-screen credit, outside of appearing in her father’s YouTube show My Morphin Life, is an episode of 6 Rounds of Chloe, which is labeled as “filming.”

For the record, I’m not saying putting her on the show would be a bad decision. A sort of “legacy” choice like this would drum up a lot of good will with older fans. Which, now that the franchise is under the new ownership of Hasbro, would be a wise publicity move.

Plus, you’ve got to believe JDF would want at least a little on-camera time with his daughter, so it would give them a nice excuse to bring Tommy back again. The Christmas episode of Power Rangers Super Ninja Steel just did something like that with brothers Yoshi  and Peter Sudarso.

Power Rangers Beast Morphers premieres premieres on Nickelodeon this February, and is expected to run through 2020. So the soonest we might expect to see Frank on screen with a morpher in her hand would be early 2021.

So yesterday, like a perfectly normal 33-year-old man, I geeked out over a photo from a children’s show.

But not just any children’s show. The Power Rangers 25th anniversary episode, which is set to air August 28 on Nickelodeon. In prime time, no less.

As you can likely tell, I’m an un-closeted, unabashed PR geek. As such, I can tell you history dictates that an anniversary show usually means appearances from past Rangers. With this big anniversary approaching, we were all expecting an episode with some familiar faces. We just weren’t entirely sure who we’d see. This week, we got our first official confirmations with this photo from IGN…

For the uninitiated, these are (left to right) Catherine Sutherland, Jason Faunt, and Jason David Frank, reprising their roles as Katherine, Wes, and Tommy. All three are regulars on the convention circuit nowadays, so it’s not necessarily a huge shock to see them. But while JDF and Jason Faunt both appeared on the show’s 20th anniversary episode, this will be Sutherland’s first on-screen appearance for PR since 1997. So it’s obviously quite special to see her with a morpher on again.

Oddly enough, some fans have balked at Kat using the Turbo powers, as opposed to the Zeo powers. The argument being that while she eventually passed her Turbo powers on to someone else, she was the one and only Pink Zeo Ranger. While I admit that given the choice I’d have her use the Zeo powers, I’m not going to nitpick it. I’m just happy to have her back.

Look closely, and you’ll see Tommy is using the Green Ranger power coin. So he’ll be the Green Ranger again, as he was when we last saw him. It makes sense, as the Green Ranger has more nostalgic value than almost anything else in the series. But I’ve actually got a soft spot for Tommy as the White Ranger. I almost wish they’d swerve us and go that way.

As for who else we’ll see on the show, there’s a list of names out there of PR actors spotted in New Zealand (where the show is filmed) during production. But again, nothing is confirmed. The only unannounced name that I think is pretty obvious is Ciara Hanna, who played Gia in Power Rangers Mega Force. She recently did some business with the show alongside JDF. So I don’t think it’s much of a stretch.

Either way, here’s hoping this show is as special as we’re all hoping it will be. After enduring for 25 years, the series deserves at least that much.