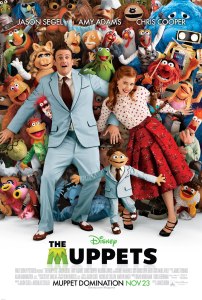 I find it very fitting that a new Toy Story short was attached to The Muppets. Toy Story 3 was such a huge hit last year with it’s central theme about growing up that made many a grown man cry. But it also had a $200 million budget, cutting edge computer animation and an A-list cast. Nothing against the Toy Story films, but The Muppets proves you don’t need all those bells and whistles to make a movie as heartfelt, tremendously entertaining, and at times genuinely moving as that. This film did it with less than half that budget and a bunch of felt puppets.

The first Muppet movie in over a decade takes place quite a few years after Kermit, Miss Piggy and the rest of the gang have gone their separate ways. During a vacation to Hollywood, Walter (a new puppet character) and Gary (Jason Segel), two brothers and lifelong Muppet fanatics, discover that an oil tycoon (Chris Cooper) is preparing to bulldoze the building that The Muppet Show was performed in. Together with Gary’s girlfriend Mary (Amy Adams), they set out to reunite the Muppets and raise enough money to buy the theater back. 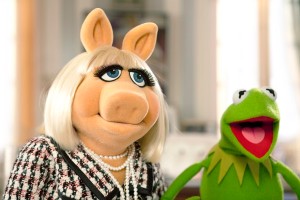 If there was ever any doubt that the Muppets still deserve their place of reverence in popular culture, this film shatters it. It hits just about every note it needs to hit to make it the perfect comeback movie for the franchise. There’s a significant nostalgia presence in the film, mostly for The Muppet Show and 1979′s The Muppet Movie. We also see the return of three classic Muppet songs, which should really warm the heart of old school Muppet fans like yours truly. Does that make me biased? Maybe, maybe not. I’d like to think it works well in the context of these characters being portrayed as entertainers making a comeback. Hopefully kids being exposed to the material for the first time find it as great as we did back in the day.

One of the great things about this move is that it’s essentially art imitating life. The Muppets have been around here and there, but since the property was purchased by The Walt Disney Company in 2004, nothing of great significance has been done with it. We got a couple of TV movies, some appearances in music videos and a some online content. But none of it seemed to generate enough interest in the franchise to really give it momentum again. As a result, the Muppets largely fell out of the limelight for awhile. It’s that touch of reality that gives this movie a bit more kick. When a network executive (Rashida Jones) tells Kermit and a room full of Muppets that they’re not famous anymore, your inner child squirms as you wonder if that’s actually true. As the characters are trying to raise the money, you’re rooting for them to succeed, just as many of us are rooting for this movie to be a success so we can have the Muppets back again. Had this movie not worked it would have been devastating for the franchise. 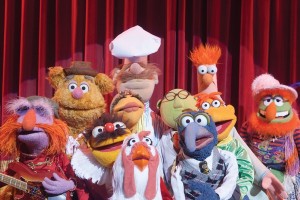 Thankfully, it works as well as any of us could have hoped for. By touching on issues like family, love, friendship and finding your place in the world, while integrating some classic Muppet-style humor and music, this film becomes a piece of work I’d like to think Jim Henson himself would have been proud of. Frank Oz, who famously helped develop many of the Muppet characters, and puppeteered and voiced Miss Piggy and Fozzy Bear, allegedly opted not to contribute to the film because of how some of the characters were portrayed. As a fan, I’m not sure what his mindset could have been at the time. Kermit and the others are as great as they’ve always been, and now they’re being shown to a new generation of fans.

The world can be a pretty dark, scary place nowadays, and that’s exactly why the Muppets needed to resurface like this. Lord knows, this place could use a few more smiles these days. And who’s more qualified to make us smile as we try and find our own rainbow connection?