Few characters got a bigger overhaul via the New 52 than Green Arrow. And as much as I enjoyed the old version of the character, he needed it. Let’s take a look at just how much baggage our old buddy Oliver Queen had picked up in the years prior to the reboot…

– Became mayor of Star City, only to be removed a short time later.

– Killed a supervillain for murdering Roy Harper’s young daughter, and destroying much of Star City. - Unmasked by a corrupt police chief after being arrested for said murder.

- Moved into a forest that suddenly grew in the middle of the city, and started living with a guy named Galahad who thought he was a knight.

In Oliver Queen’s case the reboot was certainly justified, and I’m a big fan of what DC has done with this character.

In the world of the New 52, Oliver Queen is the owner of Queen Industries, which is a global leader in “energy, transportation, infrastructure — virtually every aspect of civilized life.” Most notable is Q-Core, the company’s technology division and seemingly this world’s equivalent of Apple. Instead of iPads and iPods, this world has Q-Pads and Q-Pods. Little do (most of) the folks at Queen Industries know that Oliver uses Q-Core technology in his career as Green Arrow, Seattle’s bow-wielding superhero. In this book we see GA take on a gang of murderous internet celebrities, and a duo consisting of a deadly female ninja and a human toxic waste dump. Not a bad way to make your re-debut! 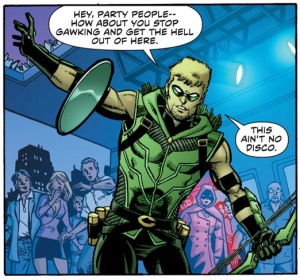 I really dig the “What if Steve Jobs was Green Arrow?” approach here. The talk about Q-Pads and what not gives readers an immediate correlation between Oliver Queen and a real world figure. Thus, we get an idea of just how important Oliver is in this fictional world. It provides some nice tangible imagery that we don’t always have with say, Bruce Wayne and Wayne Enterprises.

J.T. Krul didn’t do Green Arrow any favors in books like Rise and Fall and Into The Woods. But with this fresh start, he excels. He only writes the first half of the book, but with those issues he does a wonderful job of establishing who Oliver Queen is, both as a businessman and a superhero. Like the old Green Arrow, this version cares more about social justice than anything else. He’s not afraid to let you hear about it either, as we learn in issue #3. Krul also gave GA a compelling supporting cast right off the bat, with tech wizards Jax and Naomi (the latter of whom looks a lot like Rihanna to me) helping him out at Q-Core, his assistant Adrien helping him out on the business end, and the ever-frustrated CEO of Queen Industries, Emerson. The club of internet killers were also a nice choice for GA’s first opponents, as their modus operandi strongly lends itself to what’s obviously meant to be a modern day reinterpretation of the character.

Keith Giffen tends to be the guy DC calls when somebody suddenly leaves, or to clean up a mess, i.e. his work on The Outsiders and The Authority. So when I saw him attached to Green Arrow as a co-plotter, I panicked. But the transition is fairly smooth. Ignacio Calero jumps in as penciller for issue #6, which proves to be a bit rockier. But not so much that the book gets thrown off course. The villains we get for the second half, Blood Rose and Midas, aren’t as compelling as their predecessors. But they do okay.

I walked away from this book with renewed enthusiasm for Green Arrow, as well as J.T. Krul’s writing. It also gave me a new appreciation for Dan Jurgens’ art, which I thoroughly enjoyed. The Midas Touch loses some momentum in its second half, and the creative shakeups hurt it a bit. But from a conceptual standpoint, I think it’s one of the most fun relaunches the New 52 has produced.

I always understood the motivation behind DC Comics breaking up Green Arrow’s marriage to Black Canary and making him a forest-dwelling loner. It puts the character in touch with his Robin Hood-esque roots. But that doesn’t mean it was a good decision.

After murdering the villain Prometheus in Justice League: Cry For Justice, Green Arrow’s identity as Oliver Queen has been made public, his marriage to Black Canary is over, and a large portion of Star City lays in ruins. G.A. now lives in the forest that suddenly sprouted in the middle of the city at the beginning of Brightest Day. As Oliver continues to serve Star City as best he can, a mysterious woman calling herself The Queen has taken over Oliver’s company, Queen Industries. Her motivations are questionable, to say the least. But Green Arrow will soon discover this woman is linked to the father he barely knew.

This book was a disappointment for me. After reading some of J.T. Krul’s previous work, I was hoping he’d be able to really knock this one out of the park. He doesn’t. It’s not that putting Ollie in the forest was a bad move, per se. It was an interesting attempt at shaking up his status quo, and the fact that the forest seems to be the center of the white entity from Brightest Day adds a bit of intrigue. But the creators either don’t play the forest element up in a way that’s interesting enough, or they push the Robin Hood thing so far it becomes silly.

For instance, in this book Ollie gains a new sidekick/confidant in Galahad, a man who claims to be a knight from King Arthur’s Round Table. This character, in my opinion, was a ridiculous and feeble attempt to make Green Arrow more akin to Robin Hood by pairing him with someone with a medieval vibe. Apparently being a bow and arrow wielding, forest dwelling outlaw wasn’t enough. It’s one thing to be reminiscent of a classic character, it’s another thing to rip that character off. This book pushes Green Arrow a bit too close to the latter for my tastes. Personally, I’d rather have seen him find a civilian to bounce dialogue off of. Oddly, we almost get that in a reporter who Ollie gets information from. The reporter would have been a much better choice than some dude who thinks he’s a knight. 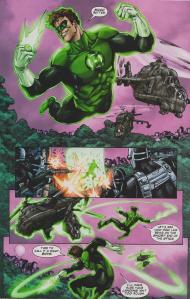 When I picked up this book, I was hoping to see Ollie really use the forest to his advantage in battle. I figured we’d see him eying targets from treetops, setting up clever traps, and really using the environment to his advantage. We really don’t see much of that. He and Hal Jordan have a battle scene with some of The Queen’s “Royal Guard,” and there’s a moment where he uses such a trap on an out of control Martian Manhunter. But that’s the best stuff we get in that regard, which obviously left me wanting more. I was hoping to see the forest really become a part of Green Arrow’s persona. Instead, it really just acts as a new setting that happens to act weirdly sometimes.

What I did enjoy about Into The Woods was the look at Oliver Queen’s parents. It was interesting to see how their influence made Ollie the character he is, and their relationship to The Queen does make for an interesting dynamic.

Though it’s all very well drawn by Diogenes Neves, everything else this book offered fell into “meh” territory. That’s a shame, as this book could have been much better. It likely isn’t a coincidence that the Green Arrow we’ll meet in September via the DCU reboot is essentially placed in the exact opposite circumstances as this version of the character. Instead of being a forest-dwelling outlaw with little use for technology, Green Arrow will be flying around the world apprehending criminals, using illegally gained intel to his advantage. In short, Ollie will be out of the woods very soon.

I can’t say I’m sad about that.

I miss the Green Arrow/Black Canary monthly title. Or at least Andrew Kreisberg’s version of it. It was usually somewhere in the bottom half of my stack. But in retrospect, it should have been higher.

Sadly, this is the sixth and last volume of the series, collecting the final four of the 30-issue series (technically there were 32, but the last two only had Green Arrow’s name on them) starring the newlywed emerald archer and sexy siren. It picks up where Big Game left off, wrapping up the story line with Cupid, Green Arrow’s sadistic stalker. With the help of the shape-shifting villain Everyman, who now bears Arrow’s likeness, she’s wreaking havoc in Star City. Along the way, we learn her origin story, and what exactly caused her mind to snap.

Issue #30 takes us into the events of Blackest Night, as Ollie has become a Black Lantern. Now Black Canary, Speedy and Conner Hawke must find a way to stop the zombified archer before he rips their hearts out…literally!

The book moves back and forth between the present day, and Cupid’s origin story, the latter beautifully pencilled by Renato Guedes. It’s a refreshing shift from shifting between Ollie and Dinah’s perspective for no apparent reason, as we saw in Big Game. It looks like Kreisberg was trying to add to Green Arrow’s rather dismal rogues gallery, even throwing in a tragic and disturbing twist for the Lieutenant Hilton character. Sadly, what with everything that’s happened in the aftermath of Justice League: Cry For Justice, it may be a long time before we see some of these characters again, if at all. That especially sucks in the case of Lieutenant Hilton, or “Hilt” as he comes to be called. I’d have enjoyed seeing where they were going with that character. His scenes toward the end of the book were really ominous.

The Blackest Night story is told from Ollie’s point of view, as his consciousness struggles to gain control of his body, which has been taken over by Nekron. He agonizes as he’s forced to reveal secrets to Dinah, and his son Conner, that he hoped would remain buried forever. It’s the best Blackest Night story they could have told for Green Arrow, and unlike most of the other Blackest Night one-shots I read, it has long-term ramifications.

Five Stages does manage to include a bit of foreshadowing. The final Kreisberg-written scene takes place just before Ollie and Dinah are beamed up to the Watchtower for the first scene in Cry For Justice. One might even argue that the evil Everyman wearing Ollie’s likeness is a bit of a prelude. Sadly though, Five Stages serves as the end of an era for Ollie and Dinah. And although J.T. Krul’s work on the new Green Arrow is compelling, I can’t help but feel like this era ended much too soon. This book is good, but the series itself could have been so much better.