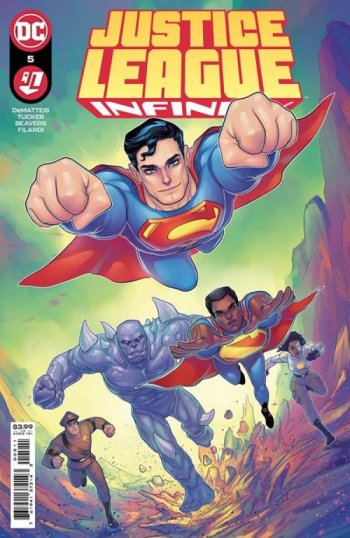 We get a lot thrown at us here. We’ve got Superman teaming with an alt-Earth Superman and a team of alt-Earth supervillains to fight a Nazi regime led by Vandal Savage. And it’s all narrated by Martian Manhunter. Oh, and the multiverse as we know it is falling apart. It works. But it’s definitely a lot to take in.

On the upside, Batman doesn’t get shoehorned into the center of things the way he does in a lot of modern Justice League stories. That’s how you know DeMatteis and Tucker are good at what they do.

Now we’re talking. Great cover. And a great premise with great execution, as Wonder Woman and Darkseid are “shipped,” as the kids would say. The result is epic, and actually somewhat moving. This is the best Infinity issue yet.

I think there’s a Hal Jordan cameo in this issue. Unless it’s supposed to be Kyle Rayner…

Both DC and Marvel have been leaning into multiverse stories lately. As such, three issues in I’ve got a little bit of multiverse fatigue when it comes to Justice League Infinity.

I’ll grant, though, that it’s somewhat interesting to see the Calvin Ellis Superman, a.k.a. the African American Superman (see the cover at right) drawn in that DC Animated Universe style. There’s not much substance to his part of this story. Not yet, at least. But it’s cool to see.

The most refreshing thing in the world of comics, to yours truly at least, is when a writer or writers really nail Superman. It’s surprising how few authors in the world can get Superman right.

Thankfully, J.M. DeMatteis and James Tucker are able to do that in Justice League Infinity #2. As the League deals with Overman, an evil version of the Man of Steel, we see the genuine article acting as an agent of peace, understanding, and finding common ground.

I’ve said it a million times: Superman is an idealist. The more writers that understand that, the better.

Much like Batman: The Adventures Continue, a nostalgia-driven book like this relies heavily on the art to recapture the feel of the series. I’m pleased to report that Ethen Beavers and Nick Filardi get the job done. This looks, and thus feels, like an episode of Justice League Unlimited.

The star of the issue, and our narrator, is Martian Manhunter. We get some insight into his thought process now that he’s left the League. That’s fertile ground for storytelling, as is the DC animated multiverse, which it looks like we’ll be exploring.

This one’s fairly low on action considering it’s the debut of a Black Widow series. The issue tries to make up for it with intrigue, but there isn’t quite enough to wet my appetite for more.

This, despite some awesome art from Elena Casagrande and Jordie Bellaire. I found it had a slightly similar vibe to the Matt Fraction/David Aja Hawkeye stuff. And of course, yet another breathtaking Adam Hughes cover.

As the cover suggests, there’s a big fight between Harley Quinn and Punchline in this issue. As obvious as her inclusion is given the nature of the story, “Joker War” has been a little too Harley-heavy for my taste. It feels like yet another case of DC shoehorning her into a story that’s not necessarily about her.

On the plus side, Jimenez and Morey are on their game here. So is Tynion, as as get a pretty powerful exchange between Batman and…Alfred’s memory? It’s not Alfred’s ghost, I know that for sure. 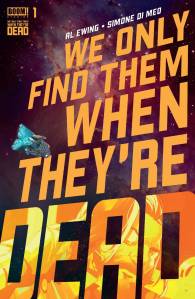 Spaceships that carve up space gods to mine humanity’s new resources? Alright book, you’ve got my attention…

This first issue is a little hard to follow, as we’re getting adjusted to how the book works and what’s going on. But by the end we get a decent hook to bring us back for next issue. Take into account how gorgeous this issue is, particularly from a coloring standpoint, and they’ve got me signed up for next time. 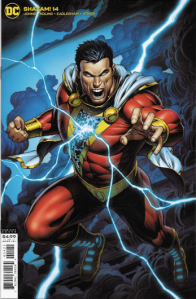 Ugh. What an awful final issue. It feels like they tried to cram in about two years worth of content. The resolution of the plot threads with Mr. Mind, Billy’s dad, and Black Adam. A pathetically condensed fight with Superboy-Prime. Then of course, they have to end the series on a happy note, though it’s hard to imagine this issue making anyone happy.

It’s not the creators’ fault, mind you. The book got cancelled. But still, the characters, the creators, and the series itself deserved better.

I’m not sure what I expected from Lonely Receiver, but it wasn’t what I got. And that’s not necessarily a bad thing.

This strikes me as a story with a lot of layers to it. It’s a story about a woman falling in love with a robot designed specifically to be her partner. But we’ve got undertones dealing with our needs as human beings that are really interesting. Thus far, this books is a little like I, Robot meets an old fashioned romance comic, with some more, shall we say, mature elements mixed in. 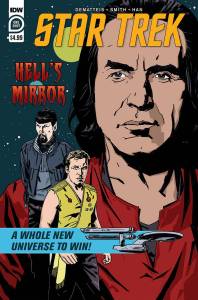 What we have here is a look at the Khan Noonien Singh of the Mirror Universe. And with that in mind, the story and the characters are about what you’d think they’d be. In that sense, this one-shot almost writes itself.

The solicitation heralded the return of J.M. DeMatteis to Star Trek after almost 40 years. For what it’s worth, I can see why. This issue feels just like an episode of the original series. Definitely worth a look for fans.

Had a nice Powers flashback looking at Michael Avon Oeming’s work. Seeing him work on the Spoiler is a little surreal.

This wasn’t quite the “Tim and Stephanie go on a date” issue that I was hoping for. That makes this one a disappointment for yours truly.

By the end of this issue Drake is back to being Robin. But is he actually Robin, or is he Red Robin? Just when we thought Tim had his identity crisis solved… 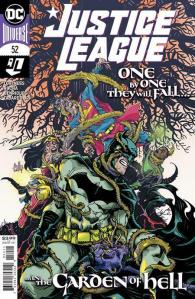 Way too much Batman to cap off a two-part filler story before the book starts to tie in with…*sigh*…Dark Nights: Death Metal.

We’ve seen all kinds of stories that dive into the psyches of various League members. It always seems like five or six issues is too long. But I’d have been happy to see “The Garden of Mercy” go another issue or two. What Loveness, Rocha, and Henriques turn in here is perfectly fine.