In two issues, The Joker has become the most interesting thing James Tynion IV is writing right now. It’s more interesting than his Batman run. I say that despite not really caring much about Punchline’s back-up feature.

Last time I compared this book to Mindhunter. But because of the Gotham City influence, these first two issues have also felt a little like Gotham Central. And God help me, it just occurred to me that book came out almost 20 years ago. 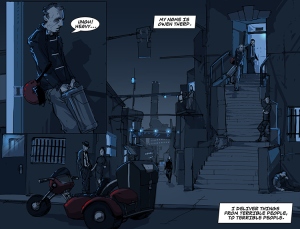 In the forward to Gotham Central, Vol. 2: Jokers and Madmen, Duane Swierczynski stated that noir essentially means “screwed.” That is to say, you can tell a story is noir if everyone is headed for a decidedly unpleasant ending, or at least not a happy one. By this definition, “screwed” described Gotham Central pretty well, and it describes Black and Blue even better.

Black and Blue is a fairly recent webcomic, and like many of the comics featured in this column, rather obscure. It depicts a sci-fi/noir world, where foul-mouthed gangsters walk alongside robot thugs. The inciting incident sees a woman try to escape from some kind of imprisoned labor by cutting off her own head and sending it somewhere. This spins into a sequence of events that slowly bring together a spiderweb of characters, from a pair of dirty cops, to a hapless bike messenger named Owen, to a local criminal gang.

The main draw of Black and Blue is its devotion noir style storytelling. Noir itself isn’t so much a genre as it is a visual style, but the elements of classic noir films are pervasive throughout the entire comic. The titular colors dominate this comic’s cover palette (with occasional bursts of red blood), giving it a very noir-like look. As a result, Black and Blue is one of the most creatively stylish webcomics I’ve ever read. 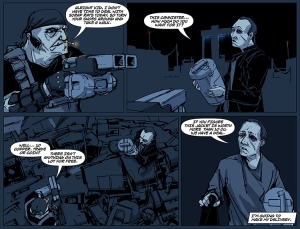 Black and Blue isn’t just beautiful to look at, but also has a quite compelling story. Mixing in a decidedly bizarre sci-fi concept is a clever way to make the story memorable, but the story doesn’t stand on that leg alone. Each of the large cast of characters has something that makes them stand out. For instance, Unger, a loanshark/butcher who Owen’s father owes money to, has a jovially sadistic feel to him. Virgil, one of the aforementioned robot thugs, is a total jackhat whose trigger-happy mentality and loud mouth nearly get him killed. Not your typical portrayal of a robot, eh?

Owen himself is a very morose, sympathetic character, stuck working for, in his words, “terrible people.” He really is a proper anti-hero. He’s not particularly brave or tough or clever or good-looking, but he has a gumption and sense of morality about him that keeps him going. He’s probably the only genuine good guy in the  story, which I believe is the point. He has my vote for the one guy in the noir story who gets the happy ending.

Another thing about this comic is that it is how incredibly intense it is. Just when you think things are slowing down, and you think you know what’s going on, something happens which turns everything on its head. You think you know how the story is going to unfold, and then you’re left in the dust. This is usually accomplished by introducing a new character, but that’s where my one criticism of Black and Blue comes in. 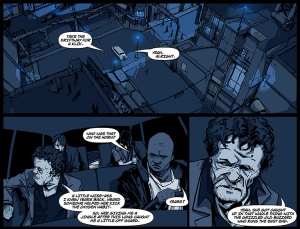 Black and Blue‘s large cast keeps getting larger. We’re introduced to a higher-up called Seagull, a back-alley doctor of some kind with a connection to the woman from the inciting incident, and a hired gun with a TV for a head. I have this feeling that eventually Jason Clarke might write himself into a corner, and when we finally get the big payoff, it will fall flat as Clarke rushes to pull everything together. However, I remain optimistic about his ability to tell this story well. The strands of the story are slowly coming together, and I believe that given time, it will weave itself into a beautiful tapestry.

Clarke himself is an obscure talent who deserves some spotlight. He’s actually putting up issues of Black and Blue for sale in a digital format. I don’t know how that will correspond to the webcomic itself, but I’m glad that he’s getting his work out in other ways. I sincerely believe that if his webcomic had a more solid marketing approach (i.e. Twitter, etc.) he could easily generate a more prominent following.

Black and Blue demonstrates the potential of one of what I am sure are many strong talents out there. It combines stylish art with engaging storytelling and memorable, believable characters that keep you interested. Any comic that reminds me of Gotham Central is worth a look-see. However, I will warn that it contains frequent strong language in addition to some graphic violence, including blood and gore. It may draw inspiration from classic noir, but in these respects, it is quite dissimilar.

I must be getting slower in my old age. It took me a little extra time to realize that Duke Thomas was the kid Batman said “You dropped your fish” to in Zero Year. (As I recall, he may have done a little more than that.) But the fact that we’ve now followed this kid from that story, through Endgame, and now to We Are Robin, is pretty cool.

That being said, the debut of We Are Robin would have been great with or without an established main character. It’s the kind of street-level Gotham City book that should always have a place on the stands. I found myself having happy flashbacks to Gotham Central while reading this issue. While the two books are different in almost every way, We Are Robin strikes me as the kind of story that will, like Gotham Central, help us get better acquainted with the city and those who live there. It’s tough to argue appeal that has. 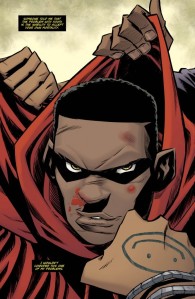 We Are Robin stars Duke Thomas, an inner city kid whose parents were infected by the Joker virus released during Endgame. Subsequently, they’ve disappeared, and Duke has become obsessed with finding them. As we see early in the issue, his quest has a penchant for getting him into trouble. Luckily, he’s about to get some help. It’s unexpected, and most certainly unconventional. But through these new allies, Duke may become part of something bigger than he ever thought possible.

I’m always partial to books with a good lead, or opening line. We Are Robin #1 has one of the best leads I’ve read in awhile…

“Someone told me that the problem with youth is the inability to accept your own mortality. I wouldn’t consider this one of my problems.”

I feel like this should have been the opener for a teenage superhero book a long time ago. We’ve certainly had no shortage of dead kids in our escapist picture books over the years. And of course, it’s a great introduction to the Duke Thomas character, who comes off pretty likeable here. He’s intelligent, witty, virtuous, and isn’t short on moves. It’s just a shame his history is tied up in something as…irritating, as Zero Year.

The appearance of Leslie Thompkins in a counselor role for Duke is encouraging as far as future issues are concerned. Leslie has largely fallen by the wayside in recent years, especially since the New 52 started. A street-level book like this is tailor-made for her, and will hopefully flesh out her role a bit more.

The issue has a more cartoony, animated feel than you might expect from a book like this, especially given the Bermejo cover. But given what I can only assume will be the youthfully exuberant tone of this book, I expect it’s a justified approach. Obviously we’ll know more once issue #2 hits the stands. My only real complaint regarding the art here is a panel we see early on, where Duke is throwing a kick with a leg that looks a little too stretchy. Maybe he’s been drinking Gingold? (Look it up, noobs.)

We Are Robin #1 is encouraging. From a marketing standpoint, it’s got a lot of what DC is looking for right now. A youth focus, much like the revamped Batgirl, as well as Gotham Academy. We’ve also got a non-white lead to help fill the diversity quota. But more importantly, this book feels compelling and fun. For so long, DC seemed to forget that comics are, ideally, supposed to be fun. Thankfully, that little factoid seems to be a priority for them again.

Image 1 from washingtonpost.com. Image 2 from comicvine.com.