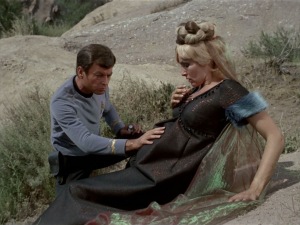 As someone who grew up with the ’60s Batman show, it’s difficult in reviewing these old Star Trek episodes to not draw comparisons between the two. As they were made around the same time, they already look and sound quite similar.

It’s even more difficult when familiar faces pop up. Julie Newmar, who for a time played Catwoman, has a central role in “Friday’s Child.” It’s also shockingly physical, given her character is pregnant…

If you’re ever looking for a Star Trek episode that holds up to today’s “woke” culture about as well as a wet paper towel, it’s this one. Look no further than when Bones, in trying to examine Newmar’s character, places his hand on her pregnant belly. Eleen tells him not to “touch me in that manner.” 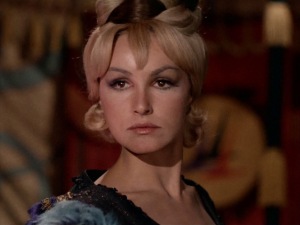 Bones responds with, “Now you listen to me, young woman. I’ll touch you in any way or manner that my professional judgment indicates.”

An unnerving line by today’s standards. But not so bad when you consider he threw in the bit about professional judgment. He is a doctor, after all.

Far less excusable is, after she slaps him across the face twice, Bones responds with a slap of his own to the heavily pregnant Eleen. Not a good look for the good doctor. Even if his patient is Catwoman.

Then again, maybe Bones had the right idea. Mere moments after the slap, Eleen seems to come around. She later insists that only McCoy is allowed to touch her. As the culture on this alien world is very male-dominated, maybe the slap earned Bones some form of respect from her? Or maybe you just had to be there…

Kirk later proceeds to give the whole thing a borderline rapey vibe by asking, “How’d you arrange to touch her, Bones? Give her a happy pill?”

None of this is meant to be offensive, of course. The episode even seems to understand that the slap was a big deal. So I credit it for that, while also taking into account when this was written. But that’s not an excuse. Even with the benefit of hindsight, this is bad writing. 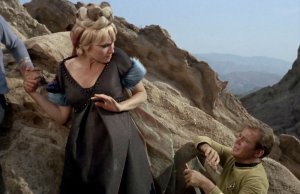 So how do you fix it? How do you write this scene by today’s standards? Let’s assume you have to have some version of it in there. Some scene where Bones convinces Eleen that he has to physically examine her…

It’s only a short time later that Eleen actually gives birth. As this was written by a man, I think we can safely assume he wasn’t cognizant of the excruciating pain involved in childbirth. So maybe have Bones offer to see to her, but she only accepts his offer once she’s really in pain?

Of course, they could have avoided a lot of trouble by taking out the whole “men can’t touch Eleen” part of the story. But that’s a separate issue.