You know what I’ve been binge-watching lately? Especially now that we’re on quarantine? Growing Pains. Yup. Been takin’ a trip back to the ’80s, when America had Mike Seaver fever. At least the ones reading Tiger Beat.

Those of you who’ve seen the show might remember Mike’s best friend Boner. Yes, Boner. A name you could totally get away with today…

On a seemingly unrelated note, let’s talk about the Batman movie franchise. Nowadays, we see the Dark Knight on the big screen every few years. The novelty is hardly even there anymore. But there was a time, specifically between 1997 and 2005, when Batman was absent from the movies. This was the post-Batman & Robin pre-Batman Begins era. For awhile, the closest thing we got were the famous OnStar commercials with Michael Gough. They don’t make ’em like that anymore…

Then in 2003, a fan film came along that presented Batman’s world in a different light. This was a darker, grimmer Gotham City than we’d seen even in the Tim Burton films. Directed by Sandy Collora, it sees the Dark Knight chase after the Joker. Naturally, he’s just escaped from Arkham Asylum. Suddenly the Joker gets nabbed by, of all things, a Predator.

So why the swerve from Growing Pains to Batman? The actor playing the Joker? Andrew Koenig, a.k.a. Richard “Boner” Stabone.

You know what the real kicker is? Fans still go crazy for 1951’s Batman #66. The story is called “The Joker’s Comedy of Errors.” But it’s probably best known by fans as “the one where the Joker says ‘boner’ a lot.” 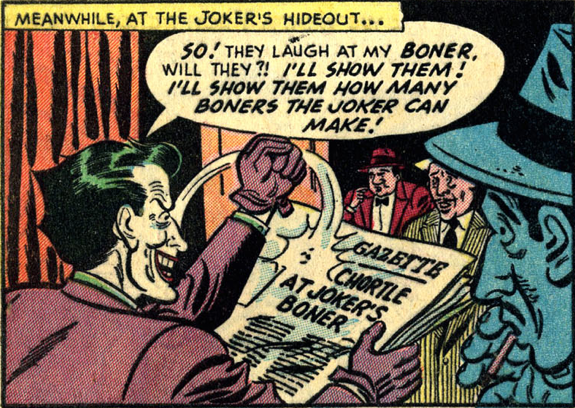 It took 52 years. But it all came full circle.