We’ve got a lot to get to this week before we even touch Raw. So let’s dive in…

Hulk Hogan wins $115 million in lawsuit against Gawker, plus $25 million in punitive damages. I’m pleased Hogan won. While he is a jackass, nobody deserves to have their privacy violated so horribly. Particularly by people you think are your friends. Maybe all of this is karma coming back to bite the Hulkster after all these years. But here’s hoping he can finally find some peace.

TMZ reports Sting is retiring from in-ring competition, “The Icon” disputes report. I’m inclined to think Sting’s rebuttal is him wanting to go out on his own terms. Even when the injury happened, Sting was talking about coming back for one more match. If Sting does get back for one more outing, that’s fantastic. But if he doesn’t, that’s fine. Sting has nothing left to prove. At this point his health is what’s important.

Drew Galloway wins TNA Heavyweight Title. I’m not sure Drew Galloway was ever going to be a big money ball player in WWE (though that’s not to say he couldn’t be), but he was certainly better than the comedy role he had at the end of his run. So seeing him take the TNA Title is a big feel-good moment, and very much deserved.

Bobby Roode and Eric Young leave TNA. This is a big blow for TNA, but obviously they’ve survived worse. In a perfect world, this means two big spots open for guys to elevate themselves. As for Roode and Young, NXT seems to be a likely destination. Particularly for Roode, who I think would really fit in well there.

Stephanie McMahon and Roman Reigns open the show. I realized something when Stephanie walked out at the top of the show: She has what some call “channel changing heat” with me. She’s been opening the show, and saying the same kind of BS for so long now, I don’t feel like I’m missing anything when I fast-forward through her mic time.

I will say, however, that it was that same heat that allowed Roman Reigns to have a good outing here. See him cover the mic while Steph was holding it, and then block her dreaded slap of disdain, was satisfying. Now if only they could get people to cheer him…

Kevin Owens def. AJ Styles after a Chris Jericho distraction. Really good match. These two got about three segments, which by WWE standards is a big time investment. And wouldn’t you know it, the Intercontinental Champion keeps some momentum heading into Wrestlemania. Imagine that!

Terry Funk featured in a pre-tape with Dean Ambrose. This was a really nice surprise. Terry Funk is truly one of a kind. He’s 71 years old, but I’m pretty sure that if they gave him enough money he’d fight Brock Lesnar himself. Hell, a few months ago he had a match with Jerry Lawler, and Lawler threw a damn fireball in his face. Actually, Ambrose might want to buzz Lawler and see if he can get him some fire…

Big E. def. Rusev after dueling promos from the League of Nations and The New Day. None of this was bad. It beat the hell out of the five minute beatdown the League gave New day last week. I won’t lie, I got a chuckle out of that shame him/Sheamus line. I don’t see this match being anything special at Wrestlemania. But The New Day will get to be on Wrestlemania. So I’ll tolerate it.

The Big Show cuts a promo about the Andre the Giant Memorial Battle Royal. A fight erupts with Kane and The Social Outcasts. Not a bad promo from The Big Show. I don’t know whether this was scripted or not, but it came off very genuine. The big guy made me believe. Sadly, that doesn’t happen too often these days.

Byron Saxton said on commentary that whoever wins this thing has the chance to change the course of their career. If that’s true, then it’s not a change for the better. Cesaro win this match two years ago, and wound up shoehorned into a heel turn that killed his momentum. Then last year Big Show won it, and it was forgotten two weeks later. If they want this match to be more than just a time killer, someone has to win it and then go on to bigger and better things. 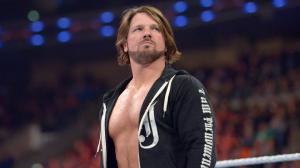 Chris Jericho def. Fandango. My God! Fandango is alive! It’s been so long since we’ve seen him that I just assumed he’s was dead and buried! Well, he was buried to an extent, wasn’t he?

Very happy to see they’re going with Chris Jericho vs. AJ Styles one more time at Wrestlemania. For awhile it was rumored they’d be stuck in the multi-man Intercontinental Title Match (more on that in a moment). But this is the match they deserve, and frankly it’s a match Wrestlemania deserves.

Kevin Owens to defend the Intercontinental Title at Wrestlemania in a ladder match against Dolph Ziggler, Sami Zayn, The Miz, Stardust, Sin Cara, and Zack Ryder. When this match was made official, I immediately thought of Neville. The poor guy broke his ankle last week, but he kept popping up in segments with Owens. The smart bet is that he was supposed to be in this match.

I’m really not a fan of these multi-man ladder matches anymore. I find them lazy from a storytelling standpoint. Plus, WWE relies far too much on these ladder matches nowadays. They all blend together. We’ve already got a big battle royal on this show. What’s so tough about putting two, or even three or four guys together in an Intercontinental Title Match, and putting the others in the battle royal?

Roman Reigns attacks Triple H backstage. They’re being very frugal about sending Roman into arenas. For the past two weeks, he’s been out there for small stretches, only to end up in a backstage fight. And he hasn’t wrestled on television in quite awhile. Not exactly ideal for your lead babyface heading into Wrestlemania. But at least the fights have been decent.

Bubba Ray Dudley def. R-Truth. Goldust and The Usos emerge to back Truth up. A shorter segment, but I can’t complain much about what I see here. I’m actually looking forward to seeing the Dudleys and the Usos go at it. I hope to see these two feud for at least another month after Wrestlemania. For that matter, I’m even looking forward to seeing what Goldust and R-Truth do as a tag team.

Vince McMahon announces that if The Undertaker loses to Shane McMahon at Wrestlemania, this will be his final Wrestemania. Did Vince actually say Shane would be ‘Taker’s “most formidable opponent” at Wrestlemania? Let’s hope Brock Lesnar didn’t hear that…

They’re late on this one. This really should have come the week after Shane came back. The Undertaker and Vince should have had an in-ring segment where ‘Taker refuses to do Vince’s dirty work, then we get this announcement. This has significantly less impact. But better late than never.

Also, those video packages they put together about Shane and his training were really good. Why they don’t do that kind of thing more often is beyond me. It’s not like they don’t have the production capabilities to do so. And they were able to add to the story without having either Shane or ‘Taker in the building.

Braun Strowman def. Dean Ambrose via disqualification. I understand what they were trying to do here. They put Ambrose out there with another giant, and in the same arena with Paul Heyman. But despite those typically intriguing elements, this was a lame duck main event. Case in point: The “this is boring” chants. The upside? They didn’t book Undertaker vs. Strowman at Wrestlemania.

At this point, I can only assume The Wyatt Family will be in the Andre Battle Royal. Having Bray win wouldn’t be the worst thing in the world, I suppose.