So Leviathan turns out to be [name redacted for spoilers’ sake]…

I’m always annoyed when big mystery comics do this. They build the bad guy’s identity up for weeks and weeks and weeks…and then it’s somebody we have to go to Wikipedia to learn about. *head on table*

Event Leviathan was a fun, suspenseful read, with some fun ideas. All the secret organizations (A.R.G.U.S., Task Force X, etc) being shut down, detectives from across the DC Universe coming together. But they really needed to stick the landing here. They didn’t.

I’m always happy to find a Kevin Maguire book in my weekly stack. Though some of the sillier expressions we get here don’t necessarily mesh with the foreboding tone the issue seems to be going for.

The issue is titled “The Truth: Prologue.” They never specifically learn what said truth is. But I’m hoping it’s not what it looks like. If it is, we may be headed toward a rehash of the New Krypton storyline they did about a decade ago. If that’s the case, then I’m leaving Superman on the stands for awhile.

I imagine the pitch for this must have been simply, “Girl becomes tree.” In the end, that’s all you need, isn’t it? Like “Weekly Comic 100s,” it’s straight and to the point.

But to their credit, Jeff Lemire, Phil Hester, and the Family Tree team got me to care about these characters. I consider that a pretty big achievement, as this premise could have come off comical. I’m not sure if it was enough to hook me for issue #2. But I’m definitely curious… 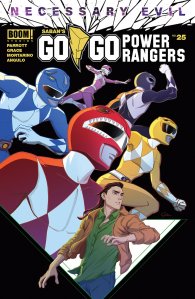 This “Necessary Evil” storyline between Go Go and the main MMPR book is essentially the BOOM! crew’s take on why Jason, Zack, and Trini really left during season two, and what they were doing. It’s obviously a better story than the show could tell us at that time.

I love the respect this book shows for the show. It takes place during the events of “White Light, Part I.” At one point, it briefly depicts a scene from that episode, and makes a point of using the actual dialogue that’s in the show. Those little details mean so much sometimes…

I’m a huge Peter Tomasi fan. But he and Doug Mahnke have had far better outings.

This “Nora Fries becomes evil” story has been done before. All in all, this may be a better story when it comes to the Mr. Freeze/Nora dynamic. But Batman spends most of this issue in the cave with Alfred and Lucius Fox standing in front of computers talking comic book science. Not exactly thrilling reading.

Later, we get a Batman trope that I absolutely loathe: The Dark Knight in some kind of armored/robot suit. Better luck next time, gentlemen.

This issue has Stormtroopers riding dinosaurs. That alone might be worth the cover price.

You’d think a Vader vs. Chewbacca fight wouldn’t actually last that long. (Remember the first level in The Force Unleashed?) But this issue actually does a great job selling it. It’s only two pages, mind you. But the right guy wins, and it’s a great character moment for Chewie.

Someone else who gets a character moment? C-3PO. And you can argue his is actually the better of the two. No joke.

Firstly, love the hat-tip to Superman #1.

I was contemplating dropping Collapser, as it seemed to be getting away from the main character’s ongoing struggle with anxiety. But in this issue, it re-asserts itself in a big way. So once again, Collapser has my full attention.

One element that’s been consistent, however, is Ilias Kyriazis’ art. This stuff is gloriously trippy and bizarre. I’m always anxious to see what he’s going to pull out of the hat next.