***It’s easy to put Batman and Superman against one another, as they’re so different. But those who truly understand them know that the Dark Knight and the Man of Steel are better together! “Best of Batman & Superman” celebrates their best moments as a team!*** 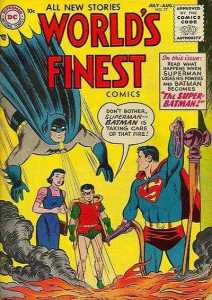 A few years back I spotlighted a story called “Super/Bat,” in which Batman gains Superman’s powers and the Man of Steel winds up powerless. It’s one of the more obvious stories you can do with these two heroes. But “Super/Bat” was hardly the first time it happened. For that, you’ve got to go back to 1955.

“The Super Bat-Man” is an oddity for this space, as it’s not what I would call a great work. At times it’s hardly even good. But it’s got a winning premise, and there’s some nice creativity on display here. It’s an intriguing “What if…?” story if nothing else.

Once again we’re with Edmond Hamilton and Curt Swan as the evil Professor Pender’s “de-charging ray” robs Superman of his powers. And of course, he’s got a “super-charging ray” that grants someone super powers for a day. Within five pages, Batman is converting the Batmobile into a Supermobile, and turning the Batcave into the Supercave. Silly? Sure. Obvious? Probably. But why the hell not? Also, the guy can’t fly anymore! He’s gonna need a car.

As one might expect from a ’50s comic, this super-powered switcheroo becomes the fodder for campy comedy. Batman may be a martial arts master and the world’s greatest detective, but he apparently doesn’t know his own super strength. Complete with Robin under his arm, his landing in the Batcave shakes not only the cave, but all of Wayne Manor. He also breaks some household stuff. Again, silly and obvious.

There’s also an awkward panel in which Swan seemingly wasn’t sure whether he was drawing a Wayne Manor or a Batcave interior. We wind up with a bizarre backdrop that’s half of each (shown above).

What I appreciate more than anything about this story is the psychological effect it has on both characters. Because of their new situation, they now have to play by different rules, and have completely different mindsets. We see them do things they’d previously never have to do. Case in point: Superman technically has to lie by omission. To stop a pair of goons stealing a fur truck (Just go with it…), he bluffs by simply standing in the middle of the road. The crooks obviously think Superman can “wreck our truck — and maybe ourselves too!” But of course, Superman isn’t wrecking anything in his current state. It’s a clever, if not a little underhanded, way of getting Superman out of a bad situation.

Incidentally, I’m fascinated by how some of these stories treat Lois Lane. She’s portrayed as cunning and clever, which she should be. But Batman, and more notably Superman, either underestimate her or flat out treat her like an idiot. After Superman busts the fur bandits, Lois quite naturally asks him why he’s driving a car. His brilliant response (shown above)? “Just an — er — idea of mine! I’ll explain later! Bye Lois!” Yeah, because that could have worked.

Moving on to Batman, he uses his new powers as an opportunity to build on his image as an agent of terror by going to the next level with his bat iconography! Well…sort of. He uses two big pieces of metal to put out a gigantic fire. But of course, they just happen to be blue and shaped like Batarangs. So if it looks like a bat and flies like a bat…

So how does Superman get his powers back? Comic book science at it’s finest, folks. It turns out Pender’s de-charging ray sprayed fine Kryptonite dust on to Superman’s costume. So a quick costume change, and we’ve got our Man of Steel back. A hastily thrown together solution. But hey, they’ve only got 12 pages. They did what they could with what they had. And for what it’s worth, fine Kryptonite dust isn’t the worst route to take under the circumstances. It’s easy to explain and easy to do away with. Just fine for a short story like this.

I do, however, have to call BS on something Batman says on the final page. Once the day has been saved, he tells Superman he’s not sorry to lose his powers, as “being a Super-Batman is too much for me!” Nope. Not a chance he says that. Even Silver Age boy scout Batman would recognize how much good he could do with Superman’s abilities. He’d understand the need to let them go, but would quietly wish he could stay super.

The story ends on a really bizarre note, even by ’50s standards. Lois “deduces” that the entire power switcheroo was a hoax, and that our heroes simply switched costumes. No matter how you slice it, that just doesn’t make sense. If Superman and Batman switch costumes, that means Bruce Wayne is walking around without his mask on, and his double-life is over. Or is she saying that Clark was switching back and forth between the Superman costume and the Batsuit? If so…why? Why would he do that? What purpose would that serve?

Lois may be cunning and clever, but even she doesn’t get them all right…

***It’s easy to put Batman and Superman against one another, as they’re so different. But those who truly understand them know that the Dark Knight and the Man of Steel are better together! “Best of Batman & Superman” celebrates their best moments as a team!***

Published in 1952, Superman #76 is generally considered to be the first “proper” meeting of Batman and Superman. Granted, they’d been appearing on comic book covers together since the 40s. They’d also appeared together with the Justice Society in the pages of All-Star Comics. Batman and Robin had also made guest appearances on The Adventures of Superman radio show. But often, when historians are asked, “When did Batman and Superman meet in the comics?”, they point to this issue.

Put on your writer/editor hat for a moment: You want to have Superman and Batman, the two biggest and most popular superheroes in the world, meet for the “first time.” Where and how does it happen? In Metropolis? Gotham City? During a battle against Lex Luthor? The Joker? How did they discover one another’s identities? Did Superman use his x-ray vision? Did Batman brilliantly deduce that Clark Kent is Superman? There are a litany of possibilities. So what did they go with…?

Superman and Batman met on a cruise ship.

That’s right, folks. They met and even discovered one another’s identities aboard a goddamn cruise ship. What’s more, in it’s own little way, it worked. It was kind of a genius move, actually.

Written by Edmond Hamilton and drawn by Curt Swan, “The Mightiest Team in the World” kicks off with Batman and Robin doing something unthinkable by today’s standards: Taking a vacation. As Dick Grayson prepares to visit relatives upstate, Bruce Wayne is about to take “a real vacation, on a coastal cruise! I’ll just relax and forget crime for a change!”

Clearly pre-Silver Age heroes knew how to balance business and pleasure, as Clark Kent is about to vacation on the same cruise. And wouldn’t you know it, he winds up sharing a room with Bruce Wayne!

Then, via the magical serendipity of fiction, a jewel thief blows up a nearby tanker truck and uses the diversion to make off with a shipment of diamonds. Naturally, our heroes are keen to jump into action. Feigning fatigue, Bruce kills the lights, prompting both men to do their superhero quick-change.

But low and behold, the light from the flames shines through the window, revealing Bruce Wayne to be Batman and Clark Kent as Superman!

I used to balk at what, in hindsight, is a pretty historic moment. But I’ve found the more years go by, the more I soften on it. As a 30-something adult, I’ve actually come to appreciate it quite a bit.

One of the cardinal sins of a Superman/Batman story, for my money, is making one hero look superior to the other. These two men should stand on equal footing. If you can’t manage that, then you shouldn’t be writing the two characters together.

With this issue, the revelation is pure happenstance. We don’t have Superman peeking under Batman’s cowl with his x-ray vision. Batman doesn’t concoct some conniving scheme to discover Clark’s secret. It’s simply fate that they discover one another’s identities by accident in a moment of heroism. In that sense, it’s kind of perfect…

What’s more, they don’t spend a lot of time digesting it or brooding over it. They recognize they still have work to do, and they get to it.

Obviously our villain is meant to be the jewel thief, who has stowed away on the cruise ship. But I’d argue another character is perhaps inadvertently placed in an opposing role: Lois Lane. After seeing Superman and Batman on board the ship, Lois comes aboard looking for the story. Our heroes now have to keep her at bay while searching for the jewel thief. 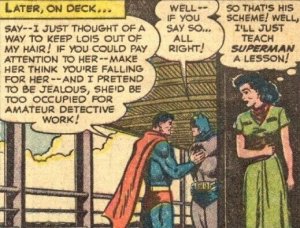 After giving Clark Kent and Bruce Wayne a sea-sickness alibi, our heroes try pawning Batman off on Lois. The idea is that if Superman pretends to be jealous, “she’d be too occupied for amateur detective work!” But Lois is on to them. She pretends to actually be enamored with the Caped Crusader, which in turn actually does make the Man of Steel jealous.

Considering some of the stories we’d later get in books like Superman’s Girlfriend Lois Lane, it’s not necessarily surprising to see them lean into a jealousy angle between Superman and Lois. But on the other hand, it’s nice to see Lois portrayed as a force to be reckoned with among the heroes. Batman may be the world’s greatest detective, but contrary to what Superman says here, Lois is hardly an amateur detective herself.

One of the classic Superman/Batman tricks is having the two disguise as one another. Superman dresses as Batman, Batman dresses as Superman, etc. Tom King and Clay Mann put a nice spin on this trope in Batman not long ago. We see an early version of it here, as after our heroes inevitably catch the bad guy, Bruce Wayne masquerades as Clark Kent while standing next to Superman to throw Lois off the scent of Clark’s true identity.

She gets the last laugh, though. Lois does indeed get a date with a hero by the end of the issue: Robin. (“Isn’t he the cutest little chap?”) How’d they get in touch, as Dick is supposed to be upstate, and we’re long before the age of cell phones? Why, that’s not important…

“The Mightiest Team in the World” is filled to the brim with pre-Silver-Age charm. What’s more, it does right by its characters. Superman and Batman come out of it looking like the world’s finest heroes. Lois Lane stands out as a clever go-getter, and not simply a brainless damsel. Even Robin gets a date by the end. Truly a red letter issue for all parties.

A cruise ship. Who’da thunk it?