It can be incredibly gratifying to spend time combing through the through the internet, then stumble upon something worth reading or watching, created by an individual of incredible artistic talent. Likewise, it can also be incredibly frustrating to find something that is so remarkably well crafted, yet reeks of needlessly lewd content. Family Man is one of these..

Scott McCloud has written that comics have the potential to dip into a potpourri of different mediums. Not all comics have to be about people with masks and superpowers fighting crime. There are pulpy adventure comics like The Adventures of Tintin, or comics that take outlandish subjects and ground them in another conventional genre (or perhaps multiple genres), i.e. what Supernatural Law did as an outlandish humor-horror courtroom drama. 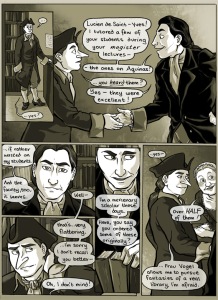 But some comics take a premise that doesn’t seem as interesting and eye-catching as those two, and then makes a genuinely compelling story out of them. In this case, Family Man does exactly that with the rather esoteric subject of 18th century German academia.

To cut a long story short, a half-Jewish theology student named Luther Levy winds up recruited as a lecturer at a university several months after being expelled from his own alma mater. He gets to know the rector, romances the librarian, and struggles with the inner turmoil of someone dealing with a crisis of faith and identity. There are also werewolves.

On paper, this is potentially one of the greatest webcomics I’ve ever read. It’s dramatic, beautifully drawn, and blessed with probably the most original plot I’ve ever come across in all of comics. Dylan Meconis (a lady, as it happens) is a spectacularly gifted storyteller. Her panel logic is both easy to read, pretty to look at, and smartly crafted.

However, that is where the other side of the coin comes in. Despite bearing witness to a Meconis’ strong talent, I cannot in good conscience overlook Family Man‘s explicit and graphic nudity and sex. I know the comic is designed for “mature” readers, and is definitely NSFW. But really, I must ask: Why?

There is nothing in this comic concerning plot, story, and character development which was furthered by the nudity. I have no doubt that someone as talented as Meconis could have gotten across that Luther and Ariana were having an affair without getting up-close and personal. Including scenes that only succeeded in unnecessarily shrinking her audience and alienating and disgusting people like me.

It’s such a shame, because Family Man is still a remarkably intelligent piece of work. Considering the creator has a background in literature, history, and philosophy, she obviously knows her stuff. The idea of centering the plot around a university campus in 18th century Germany, in addition to the werewolf subplot, is a stroke of genius.

First, take the drama of the lone heretic struggling against the religious establishment (in a way that’s halfway interesting, no less), not forgetting the hectic family politics back home. Next, add in a bit of supernatural horror. Season with vintage college frat boy antics, courtesy of Lucien the Frenchman, and add an entirely black-and-white color pallet to taste. The result? Family Man, a webcomic that is admittedly compelling if frustratingly obscene.