Yeesh. Talk about a loaded week. Big finales, big debuts, and some Star Wars backstory we’ve been waiting years for. And of course, with big issues, come big upticks in pricing. Mostly at DC. They actually had the gall to charge $4.99 for the Tom King Batman finale. Oye.

But next week is largely a throwaway week. (Unless you’re Marvel. Kudos to them.) So I’ll be able to play a little catch up. So next week’s batch will include Family Tree #2, Shazam #9, Star Wars: Empire Ascendant, Batman/Superman #5.

I was ready to be mad at this issue for giving us stuff we should have gotten in one of the movies. As it turns out, this was benign.

In The Last Jedi, Luke says that after burning down the temple, Ben Solo left with some of his other students. Here, we learn that doesn’t quite mean what it sounds like. We also learn who the Knights of Ren are, which is welcome information.

Not the strongest first issue I’ve ever seen. But the intrigue around what happened to Ben Solo is enough to bring us back for more. 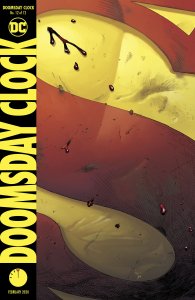 From the beginning, we’ve known this book has been building toward Superman vs. Doctor Manhattan. A symbol of hope against a symbol of cynicism. The implication being that Superman would ultimately get through to Doc, and bring about a change of heart.

We do get a scene like that in this issue. But it’s so brief, and frankly a little contrived, that it was hardly worth the two years of build-up.

That’s right, folks. Doomsday Clock #1 came out in November 2017. It’s taken us more than two years to get here. Really takes the edge off, doesn’t it?

Here we have yet another big finale that ends not with a bang, but with a whimper.

Tom King is a good writer. I believe that. But for whatever reason, this “City of Bane” story went on way too long, and he ended up overstaying his welcome on Batman. The truly sad part? There’s a good story in here if you rifle through it, and maybe rearrange some pieces.

On the upside? Mikel Janin’s work on Batman has been consistently great. As far as I’m concerned, he’s welcome back in Gotham any time. 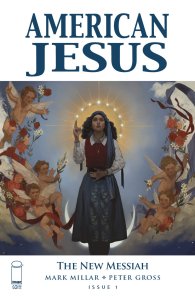 A 14-year-old Hispanic girl becomes the modern-day Virgin Mary in a story written by the guy who did books like Kick-Ass and Nemesis? Sure. Sounds harmless enough…

Maybe it’s me, but the art in this book seems a little weird. Like the proportions are just a touch off. It’s minor, just just prominent enough to be noticeable.

There’s a lot of intrigue here, given the sensitive topic and Millar’s penchant for the outlandish. While there’s nothing blasphemous in this issue (at least as far as I can see), I figure it’s just a matter of time. 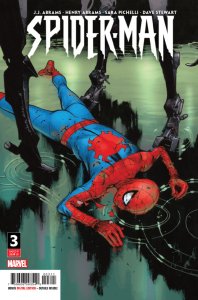 Tony Stark pops up in this book, and now our story has an Avengers angle to it. That’s disappointing. This is a story about the legacy of Spider-Man, and the strained relationship between a father and son. So why not keep the lens focused on Spidey’s world, and not open things up to the larger Marvel Universe until later? We need to be focusing on Ben right now. Not some wacky take on Tony Stark as an old man.

On the upside, we get further into who Cadaverous is. Good stuff, with Pichelli’s art on point.

While it lacks the impact and sizzle of a Jim-Lee-drawn debut, this issue has some intrigue to it. We’ve got three mainstays in Deadshot, Harley, and King Shark. But we’ve also got a big group of new characters. They kind of look like what Marv Wolfman and George Perez would produce if asked to produce a modern team of superheroes.

Mind you, some of them are dead when we close the issue. But if even one of them sticks for a decent amount of time, that’s an accomplishment. 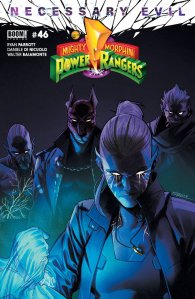 A few little things I noticed that aren’t out of character per se, but perhaps show how these characters are different in this time period…

– Kimberly stepping up into more of a leadership role with the three new Rangers.

– Trini’s more sarcastic personality. It’s not how I would write the character, as she’s normally more reserved. But we can chalk it up to her gaining confidence through her experiences as a Power Ranger.

Doomsday Clock #1 is a pretty good first chapter. Assuming you have an off switch for your conscience.

By now I really thought I’d be calloused to the idea of DC doing a sequel to Watchmen without the approval or involvement of author Alan Moore or artist Dave Gibbons. Not that they need it. They own the rights to the story and characters, and have been milking them ever since. Naturally, Moore has been sore about it for decades. Years ago the company even published several character-centric Before Watchmen prequel stories. So Doomsday Clock is hardly unprecedented. Throw in all the bits and pieces of Watchmen lore DC has sprinkled around since the Rebirth story began, and you’d think I’d be ready for this…

But Doomsday Clock #1 feels dirty just like Before Watchmen felt dirty. Realities of the publishing industry notwithstanding, this reeks of DC taking toys out of someone else’s sandbox. If you can ignore that side of things, I imagine Doomsday Clock simply becomes the latest Geoff Johns epic. But for many of us in the know, there’s a discomfort level to all this that isn’t going away.

Set several years after the events of Watchmen, we see that Adrian Veidt’s hoax to bring about world peace was only a short term success. Global tensions are at an all time high, as is the threat of nuclear war. Amidst all of this, Rorschach, or rather someone assuming the Rorschach identity, breaks two former supervillains out of prison to aid he and Veldt in setting the world right again. To do that, Doctor Manhattan must be found. But as we’ve seen, the former Jonathan Osterman has been busy making waves in the DC Universe. Worlds are about to collide. 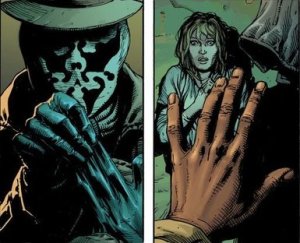 When you come back somewhere after a long time away, you’re naturally curious to see what changed in your absence. Despite what you might call it’s lack of authenticity, parts of Doomsday Clock are intriguing from a world-building perspective. How exactly do things change after a giant alien squid is supposedly dropped on New York City? Not that much, apparently. The world we’re met with is very similar to the one we left. Distress over the airwaves, violence in the streets. The more things change, the more they stay the same. Even our narrator is the same, more or less…

Indeed, there’s a new Rorschach in town. We don’t know much about who he is, other than he works with Veldt, and has brown skin (shown above). I initially rolled my eyes at the idea of Rorschach being a “legacy character.” It’s a tried and true tool in the world of superhero comics. Have a dead hero? Just make a new one with the same M.O. But Rorschach had such a unique and distinct voice that it’s almost cringeworthy to use that trick with him.

But did they even have a choice? Rorschach is such a gigantic and integral part of Watchmen. We saw so much of that world through his eyes. You almost can’t revisit it without him. Plus, Watchmen had legacy characters. Like Doomsday Clock itself, I can see why you’d want to create another Rorschach, but something about it feels really wrong. And no, it’s got nothing to do with his race. Having him be black is fine. It doesn’t add or subtract anything, outside of making for a clever reveal.

Watchmen was never big on humor, per se. You can find things to chuckle about, but very little (if anything) is played for straight up laughs. That’s not the case with Doomsday Clock. There are a handful of funny lines and one full-on gag, most of which revolve around the ultra-serious Rorschach reacting to things. While the humor works, this isn’t a world we’re used to laughing at. Watchmen was big on darkness and despair. We see a rape, the murder of a pregnant woman, dogs being murdered with a meat cleaver, etc. So while it’s funny to see a character called the Mime pull imaginary weapons out of a prison locker (shown below), the tone shift takes some getting used to. 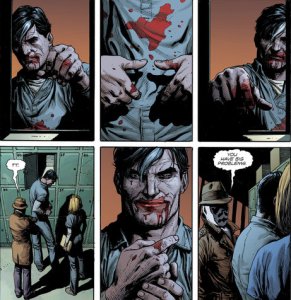 Technologically, the comic book industry has come a long way since Watchmen. The story had a pulpy aesthetic to it that was ultimately part of its charm. Doomsday Clock doesn’t try to replicate that. But I give artist Gary Frank and colorist Brad Anderson a lot of credit for making this look and feel like a story set in the same universe. The colors have a lot more depth and richness. But there’s nevertheless something familiar about those city streets we open up on, or the dark and dank feel of the prison. Letterer Rob Leigh even nailed Rorschach’s handwriting for the caption boxes. (Even though this isn’t the same Rorschach anymore. So does that even make sense?) Comparatively, Doomsday Clock is almost like switching your television from standard to high definition, with the one drawback being the loss of the pulp look.

Tacked on at the end of all this is none other than Superman. We flash back via dream sequence to Ma and Pa Kent driving a young Clark to senior prom. We’re reminded just how lonesome and isolated Clark’s secret can make him as he watches the other kids dance. We then see the tragic accident that killed his adoptive parents.

Oddly enough, this strikes me as a scene about Doctor Manhattan. Doomsday Clock is meant to be about a conflict between hope and cynicism. With the DC Universe representing hope, and Watchmen cynicism. Superman is, of course, an ever present symbol of hope and optimism. A man raised by loving parents who instilled him with a set of values and ideals. In contrast, Jonathan Osterman lost his mother at a young age, and was forced by his father to pursue a career in nuclear physics. Later, Doctor Manhattan’s powers left him increasingly isolated. He eventually regarded human life itself as insignificant. These are to men on polar opposite ends of a spectrum. Yet under different circumstances, Clark Kent could have become Doctor Manhattan. With a better upbringing, Jon Osterman could have been a symbol of hope… 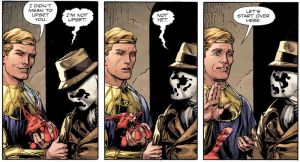 With all this talk of hope and cynicism, Doomsday Clock has the potential to be very poignant, given the era we’re living in. But good or bad, it’s destined to have an asterisk next to it because of the circumstances with Watchmen and its creators. Much can be said about what rights creators should or shouldn’t have, as well as Moore’s less than sunny disposition. But what I keep coming back to is this: If I’d put my time, my energy, and my heart into making this world and these characters, and a big company was in a position to make a lot of money off them, I’d want to be listened to. I’d like to think certain things outweigh the importance of money. Like respect. Dignity. Integrity.