I read a review not long ago, entitled: “You can’t force the things you loved as a kid to grow up with you.” It was in reference to the new Power Rangers movie. But the same idea can obviously apply to the Mighty Morphin Power Rangers series from BOOM! Studios.

But perhaps certain things grow up better than others.

Last its predecessor last year, Mighty Morphin Power Rangers 2017 Annual contains several short stories. What stuck with me after I closed this issue was how relatively mature it felt. Certainly by Power Rangers standards. Mind you, as a ’90s kid I’m inevitably biased here. I make no bones about that. But I think what this annual highlights more than anything is that MMPR can indeed work when played straight as a teenage superhero book. And it can work in a number of ways. You can go the moody teen angst route. You can approach it like a young adult novel. You can even go flat out dark. There’s something to be said for looking at these characters and this world through different lenses. Especially when you’re trying to play to readers that grew up with the show. The BOOM! that way before. This story also makes Rita look delightfully cunning, manipulative, and that much more wicked. I didn’t recognize Goni Montes’ work at first. I’d never seen him work in this style before. Those amazing helmet variant covers for MMPR #1 are still plastered into my brain. I have yet to get tired of his work on this book.

The next story, focused on the Yellow Ranger’s day off being interrupted by Goldar, is a preview of sorts for a second monthly MMPR title called Go Go Power Rangers. Series artist Dan Mora has a manga-influenced, animated style that should be a lot of fun. Author Tom Taylor (Injustice, All-New Wolverine) isn’t on Go Go Power Rangers, but he’s perfectly serviceable here. Much better than his work on Justice League/Mighty Morphin Power Rangers, that’s for sure.

The clumsily titled “Forever Mighty Morpin Black” is next, written and illustrated by MMPR‘s regular cover artist Jamal Campbell. As both a continuity buff and a Power Rangers geek, this was a real treat. In the distant future, Adam Park, who succeeded Zack as the Black Ranger, returns to the ruins of the Command Center. He calls for help across time and space from other incarnations of the Black Ranger. What follows is a feast for the eyes, as variations of Zack and Adam arrive to fight off a monster. It’s essentially an Easter egg hunt for PR fans, as you spot all the little details and nods Campbell has sprinkled in.

But having heaped all this praise upon this issue,  it’s Trey Moore (Rachel Rising) and Frazer Irving that really steal the show. Seeing Irving doing PR is surreal to begin with. But in this context, it works. In last year’s annual, Moore gave us Goldar’s origin story. This year we get Finster’s. Moore and Irving give us what is essentially the first Power Rangers horror story. We see that at his core he’s an artist longing for inspiration, but he finds it and justifies it in the worst way imaginable. When he later is recruited by Rita to make monsters using a mystical, life-granting clay, he searches for vindication by attempting to resurrect someone he lost to his own selfishness.

There’s a haunting quality to this story that’s brilliant. I’m hesitant to say much more, for fear of taunting the big pay-off. But these eight-pages are among the creative highlights of BOOM’s run with the PR license. It’s that good. If you’re an older fan, you owe it to yourself to check it out.

My one nitpick with it? Finster’s line (shown above): “I’m not a bad person!” That struck me as awkward. It feels like it should have been “I’m not evil” or something. 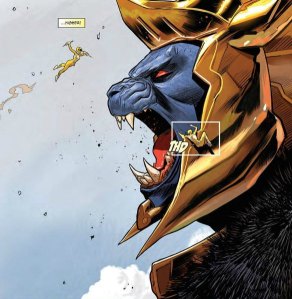 The issue ends with a more cartoony tale about Goldar and Scorpina getting a day off. It’s more akin to a Bulk and Skull story. Goldar is able to disguise himself with human clothes and a baseball cap. It’s a hard swerve to go from the Finster story to this one. But it’s fine. This kind of stuff obviously has it’s place. Heck, this material is arguably more faithful to the tone of the television show.

A year later, I still have really fond memories of last year’s MMPR Annual. I don’t doubt that a year from now, I’ll still have fond memories of this one. It’s no accident that we’ve gotten things like a spin-off miniseries, and a second series in Go Go Power Rangers. BOOM! is producing quality. Not just quality nostalgia, either. Pure and simple quality.