It’s a little surreal to see all the Peanuts publicity over the last several months. I was never much of a fan when I was a kid. But after seeing the Peanuts exhibit at the Museum of Science and Industry in Chicago a few years ago, I became really interested in the life of Charles Schulz. Books like Schulz and Peanuts and My Life with Charlie Brown are on my shelf, and I’ve started looking at the strip with an adult’s eyes. You start looking at it completely differently when you realize it was written by a man who, to an extent, was extremely insecure about his place in the world. That’s so odd, considering he’s one of the medium’s all-time greats. But then you look at the strips, and you see Charlie Brown say things like…

You look at this kind of stuff, and you realize that Schulz was not only providing us with his own special view of the world, but he was plunging into the murky depths of his own psyche and putting his findings on the page. It sounds pretty heavy when you put it like that, but it’s true.

When you look at the strip from this perspective, it’s so weird to see Peanuts looked at like a kids franchise, even though it’s been that way for so many years. The movie seems to be at least partially capturing the essence of the Charlie Brown character, though. 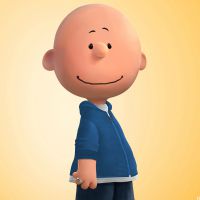 Curiously, while they won’t let you give a child character facial hair, they apparently will let you give them a wedding ring. Yes, I know it’s the wrong hand. But why else would they put it in there? Maybe it’s a purity ring…