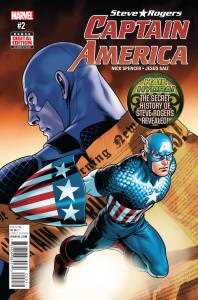 In issue #1, Steve Rogers did the unthinkable. He uttered the words: “Hail Hydra,” seemingly pledging his allegiance to the terrorist organization. But what’s really going on? Has Captain America truly turned to the dark side?

Cap’s sudden change in allegiance can be attributed to Kobik, the sentient embodiment of cosmic cube fragments that has taken the form of a little girl. Just as a cosmic cube can alter reality itself, Kobik has altered Steve Rogers’ memories. In restoring him to his younger self during the Pleasant Hill storyline, Kobik also shifted Steve’s loyalties. And the person guiding Kobe’s actions? Red Skull himself.

So basically, they went the mind control route. And that’s fine. There’s been some speculation that this issue was somehow changed following the backlash issue #1 got. That’s laughable. This is the story that Spencer wanted to tell, and it’s a story he stands by. As he should. Had he made the Hydra stuff part of Cap’s backstory, as opposed to a lie created by a cosmic cube, he’d have made it work. Was it controversial? Absolutely. Did it strike a nerve with readers? Of course it did. This character stands for something, and means a lot to people. But sometimes stunning revelations like this lead to great stories.

As Spencer himself wrote on his Twitter account: “[The] idea that we should treat a character with kid gloves due to symbolic value is a great way to lose symbolic value.”

Getting more into the issue itself, I love that this has all been Red Skull’s doing. He can’t compromise Cap’s values or integrity by himself, so he literally has to alter reality to do it. It’s perfectly twisted, insidious, and in character. Jesus Saiz also draws a hell of a Red Skull, particularly on the splash page shown above. From an art standpoint, he’s the highlight of the issue. Saiz makes him more expressive than many other artists do.

The events of the Pleasant Hill storyline factor heavily into what we see here. Bluntly, none of the Pleasant Hill stuff caught my interest, so I’m seeing a lot of this information for the first time. Spencer, Saiz, and the team walk you through everything. There’s still a frustrating, perhaps inevitable, disconnect for new readers. But the look back at Red Skull’s deliberate and drawn out plan is satisfying, and a lot of fun.

While we now know the truth behind Cap’s sudden allegiance to Hydra, from an in-story perspective, nothing has changed. For all intents and purposes, Captain America has now become an agent of evil. But what happens when his true allies learn what he’s done? What happens when Steve Rogers becomes an enemy of liberty, instead of its champion? We’ve already seen so much controversy. But this is only the beginning.