So here we have it: The third and final Brightest Day collection, which ties everything together, and lets us know who Earth’s ultimate champion is. I’m going to stay spoiler free here, but I talked at length about the big reveals at the end when Brightest Day #24 was originally published. So that’ll be your fix for spoilers on this one.

When we open the book, all the characters are in the middle of their respective storylines. Boston Brand (Deadman) reunites with his only living relative, Hawkman and Hawkgirl do battle alongside Star Sapphire in space, Ronnie Raymond and Jason Rusch race to save Ronnie’s father and Professor Stein, Martian Manhunter continues to be tormented by a most unexpectd foe, and Aquaman and the new Aqualad prepare for what may be the battle of their lives. All the while, the entity that resides within the mysterious White Lantern is becoming more aggressive in preparation for a moment that may decide the fate of the world.

Until we get to our big reveal at the end, this book is pretty good. In all fairness, while I wasn’t a big fan of the ending, it did make sense given what had been established in Blackest Night and other stories. I found myself wanting to see more from the Deadman story arc, but it’s likely best that things turned out the way they did. If they overdid it, the arc could have been tainted. The Hawkman/Hawgirl story never really did it for me, but it ends on an interesting enough note.

Aquaman and his cast of characters get a nice spotlight in this particular book, as the “Aquawar” story within a story played out. Particularly strong were the moments between Aquaman and Black Manta, two rivals whose contempt for one another rivals that of Batman and The Joker (yep, I said it). Aquaman and the new Aqualad, Jackson Hyde, also have a few interesting moments together, which leads me to believe the two will have an interesting partnership.

This book has what some would consider to be an all-star team of artists. Ivan Reis’ work with Johns has been well publicized, and he delivers yet again here. Ardian Syaf continues to have strong showings (despite his talent being wasted on that damn Grounded story). Those two turn in the strongest performances here in my opinion, though the art is great all around. 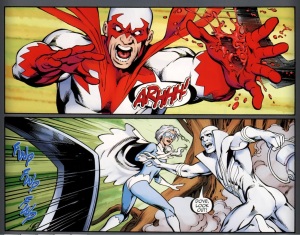 I’m interested to see if this entire story remains in continuity with the New 52. Apparently, the romance between Dove and Deadman will still be in continuity. And as our mystery savior at the end is getting his own book as well, one can conclude his arc is canon. Firestorm may be as well. To an extent, one can only speculate.

In any event, Brightest Day certainly created a decent amount of momentum for its stars, which may be evidenced by most of the stars getting their own ongoing books this month. Deadman will also be featured in the first story arc of DC Universe Presents. From my perspective, this final volume saw the quality dip a bit, but not much. Brightest Day is a worthwhile venture.