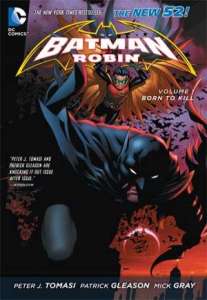 Born To Kill is one of the best Batman stories to come out of the New 52 thus far. Not only does it offer some really good character-driven drama, but it’s exactly what it needs to be: A book that dissects the relationship between Bruce and Damian Wayne. It tells us how this father and son from different worlds can not only co-exist as family, but work together as the new Dynamic Duo.

Quick history lesson: Damian Wayne is the child of Bruce Wayne and Talia al Ghul, grown in an artificial womb after a passionate encounter between the two (hey totally had sex). From a very young age, she and the League of Assassins train Damian as a warrior and a killer. Years later, Talia reveals a relentlessly spoiled pre-teen Damian to Batman. Though he had a rocky start, and his precocious nature garnered him great resentment from much of the superhero community, Damian became Robin after the events of Final Crisis. He teamed with Dick Grayson, who had taken over the role of Batman, for some time before Bruce returned and assumed the role again. Bruce initially refused to team with his defiant son. But now he’s attempting to do right by Damian, raising him to not only be a good crimefighter, but a good man. 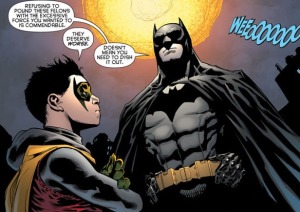 Unfortunately, a figure from Bruce Wayne’s past has re-emerged to not only destroy Batman, but tempt Damian into giving in to his murderous instincts.

I think one of the keys to writing Damian is capturing his arrogant sense of entitlement, and Tomasi does that right off the bat by putting Damian next to Bruce as he’s paying tribute to his parents. He calls them “just dusty names on  the walls to me” and says “grief and disease are a disease of the weak.” Bruce shows Damian a parent’s patience, but isn’t afraid to tell him to show some respect. All this is happening as Bruce is turning over a new leaf in terms of his parents, deciding to honor their lives instead of constantly remembering their deaths. I like this scene because it sets up how the Bruce/Damian team is going to work. When Damian teamed with Dick, Dick was the optimist and Damian was the constant cynic/would-be realist. Here we see that Bruce is going to try to take on that same role for his son’s sake.

But Bruce being Bruce, that doesn’t work out. He wants what’s best for his son, but he lacks Dick’s people skills and ends up driving him directly into the arms of the villainous Nobody. With Nobody we get a take on the classic angel on one shoulder, devil on the other routine. It works well, as Damian’s bloody upbringing and instincts are things we needed to see hashed out between father and son before we could believe they could act as a team. It plays out as one might expect, with an interesting swerve at the climax.

Over the years, we’ve seen Batman explain his “no kill” rule in various ways, in various mediums. Most of them are variations on “if I kill the bad guys, I’ll be just like them.” We’ve heard a lot of “it separates us from them,” and writers also seem to like “if I go down that road I’ll never come back.” But in Born To Kill, Peter Tomasi does it in a way that’s very frank, practical, and cliche-free. In what terms out to be Bruce and Damian’s first real father/son moment, Bruce talks about the principles he’s sworn to live by. Then he gives us this line…

I love that. It’s a great way to explain Batman’s philosophy without relying on stuff we’ve heard a million times. It’s my favorite moment in the entire book, even though Damian appears to be looking at his father’s crotch in the shot, and Bruce appears to be heavily pregnant. (I kid Patrick Gleason. He does some really good work here.)

While it’s certainly true that Born To Kill relies a lot on a continuity which at this point was in a major state of flux, which might have confused readers, the character work it presents makes that worthwhile. Odd as it may sound, I had always wondered what kind of father Bruce Wayne would be. Now we essentially have an entire series to answer that question. This book is hopefully just the start of a series that will expand upon the great character of Damian, and continue to build on the unique dynamic he shares with everyone’s favorite Dark Knight Detective.