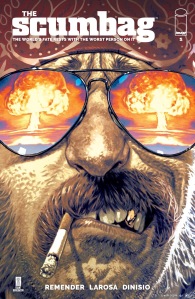 This issue has, perhaps fittingly, the only blatant female pereneum shots I’ve ever seen. Clothed, obviously. But still.

I do love this premise, though. Essentially, giving Captain America’s super-serum to the worst person possible. And The Scumbag most certainly sells us on that point. There’s a gross-out quality to this book that doesn’t necessarily appeal to me. But there may be enough intrigue for me to give it another look…

As our gorgeous Jamal Campbell cover indicates, we get a new Green Ranger in this series finale. (Two new ones start next month.) It’s not exactly an exciting choice. But the character sells comic books.

I’m assuming this is the last we’ll see of these new Dark Rangers. That’s a shame, as I feel like this story could have gone another issue or two. I wasn’t sure about them initially. But they grew on me. 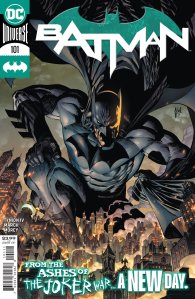 I’m not normally a big Guillem March fan. But in this issue he does a two-page rendering of Batman in the classic blue and gray costume that’s pretty awesome.

This issue tries to sell us on the idea that things are going to be very different for Batman and Gotham City going forward, with Bruce even getting a new base of operations. Of course, this kind of thing has been done before with varying degrees of success. Despite my mixed feelings on “Joker War,” I still have confidence in Tynion IV to deliver.

A strictly okay issue. Transitional, if nothing else. The first half is a mildly amusing story about Raphael getting a motorcycle. Then we go into a brief tale about Leo and some of the Mutant Town kids breaking into Old Hob’s lair. The latter is the more intriguing of the two, as the angle with the kids has never been done in a TMNT story. But all in all, this one is pretty skippable. 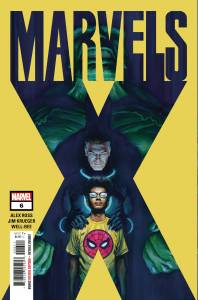 This mini goes out on something of a whimper. But if you enjoyed Earth X, I suspect you’ll like it regardless.

The star of the book, besides Ross of course, is Well-Bee. His grounded, slightly gritty take on the Marvel Universe is fitting given we have a civilian as our point-of-view character. As the series expands, its fun to see him get to draw all the classic Marvel characters.

Ron Garney draws a hell of a Hulk. Tremendous line work. My only complaint is we don’t really get to see the body of the fight between Juggernaut and Hulk. That’s what’s drawing readers in, yes? So at least a portion of your readership is going to come away disappointed…

Still, I’m liking the whole “Juggernaut teams with a YouTuber” premise. It’s enough to bring me back for at least one more issue.