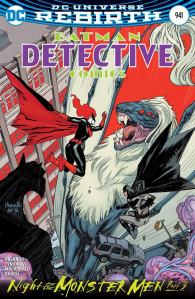 Thus far, “Night of the Monster Men” has left me uninspired. Certainly not what I was hoping for after what happened with Tim Drake last issue.

The plot of this Batman/Detective Comics/Nightwing crossover is pretty straightforward. Professor Hugo Strange is unleashes a bunch of giant monsters on Gotham City. All the while, a hurricane threatens to hit the city during the attack. Batman, Batwoman, Nightwing, Gotham Girl, and various other members of the surrogate “Bat-Family” are truly in a battle against he elements. But in the wake of Tim’s “death,” the Dark Knight is having trouble allowing others to take the risks necessary to save lives.

Before we get into this issue, or “Night of the Monster Men” as a whole, let’s talk a little bit about what happened to Tim. Rumors of his demise are greatly exaggerated. During the events of Detective Comics #940, he attempted to sacrifice himself in the battle against Jacob Kane and the Colony. But the mysterious Mr. Oz, who we’ve previously seen interact with Superman, captured him. Now everyone, including Batman, believes Tim to be dead. By and large, the whole thing was well done. The art was engaging. The writing was impactful. It was a nice way to put the character on the shelf for refreshment, while also paying tribute to him. 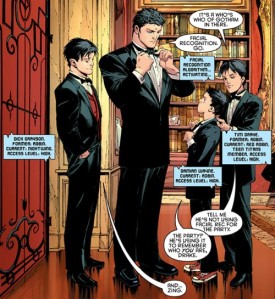 But part of me really wishes they hadn’t done it.

I understand there are only so many routes to take with these  superhero characters. At some point, everybody’s going to have a brush with death. But now, all four characters that have been the official canonical Robin have either been killed off, or thought to be dead by almost everyone in their universe. Even Stephanie Brown, who was only Robin for about a month, has “died” and come back. What’s more, most of it has happened in just the last five years.

Let’s look at the timeline…

The concept of Robin is pretty hard to swallow. It’s always been fun, but if you look at it in a real world context, there’s a definite creep factor to it. This Dead Robin trope ups that creep factor considerably. What we have here is a man continually enlisting aids from these boys, who eventually age out of their role, and all have the same black hair style. And eventually, they all die violently. 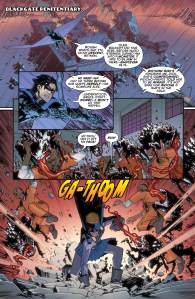 Am I getting carried away? Maybe. But at the very least, the storytelling in these Bat-books is getting repetitive. I’ll at least credit Tynion and the Detective Comics crew for doing it better than it’s been done in awhile.

“Night of the Monster Men” feels like it’s going to be an examination of the trust Batman puts in his partners, which he’s reconsidering after what happened to Tim. At one point in this issue, Batwoman tells him he’s in a situation he can’t control. Our hero’s response is: “I refuse to accept that scenario.”

What’s happening in Batman’s head is, thus far, the most interesting element in all of this. The trouble is there isn’t much more to latch on to in terms of meat. At least not yet. The monsters look cool enough, but we see they’re somehow created from cadavers. So while they’re obviously very threatening, we’re not invested in them much more than we would be mindless foot soldiers or zombies. Thankfully, that changes at the end of this issue.

This is my first exposure to Andy MacDonald’s work. But he and colorist John Rauch give everything a nice texture, and make solid use of splash pages and larger panels to show off these Godzilla-ish monsters. Our creators also don’t hesitate to use “They’re not alive? Let’s rip ’em to shreds!” logic when it comes to Gotham Girl fighting them.

“Night of the Monster Men” seems like a summer blockbuster that arrived late. Thus far, like many a summer blockbuster, it’s heavy on the action, but low on substance. As we’re halfway through, that doesn’t bode well. We’ve got some really good talent on these books, so I want to give them the benefit of the doubt. But I don’t have high hopes. 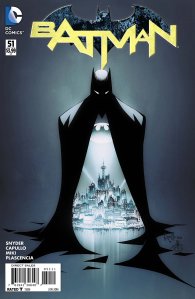 While I haven’t been shy in my criticisms of the Scott Snyder/Greg Capullo Batman run, I’ve always given them credit for thinking big. So it’s interesting that they took a quieter approach for their final issue. On the plus side, no giant robots!

When a mass blackout hits Gotham City, the Caped Crusader is tasked with not only keeping order, but finding out who it is that’s left his city in darkness. His quest will take him across the city, including Arkham Asylum, and the doorstep of the Court of Owls. But in the end, the circumstances aren’t at all what he expected.

Snyder opened Batman #1 with talk of a column in the Gotham Gazette called “Gotham is…” Readers are asked to complete that sentence, and various different answers come in. Snyder bookends this run by titling this issue “Gotham Is.” We even meet the column’s author. This approach is very fitting, as Snyder has been praised for making Gotham City itself a character in his work. This was true even in his run on Detective Comics. In a sense, Snyder’s best character work on this series has been with the city itself. He’s not the only modern Batman writer to do so, but no one has done it better than he has.

Snyder and Capullo have done a lot of justice to the Alfred character. He was fantastic in issue #49 (though Yanick Paquette was the artist on that one) because of the sheer raw emotion he showed. But in this issue we see the return of snarky, jokey Alfred. I think most would agree Batman shouldn’t be a jokey character, per se. But he’s known Alfred his whole life, so it makes sense that he’d be able to show his faithful butler/surrogate father another side of him. In this issue they joke a bit about Bruce’s “justice flavored” nutrient beverage, as well as the origin of Alfred’s new right hand. Throw in that awesome shot of the Batcave by Capullo, and you’ve got a hell of a kick off to your final issue.

Much like Batman’s connected contacts from issue #1 (which I hated), we get another new piece of technology in this issue: A holographic camouflage device for the Batmobile. This allows the car to patrol the streets looking like a civilian vehicle. I buy this a hell of a lot more than the damn contacts, and it makes a hell of a lot of sense for the Batmobile to have something like that. So I’m game.

In issue #1, we saw a big breakout inside Arkham Asylum that was ultimately foiled by Batman. Capullo drew a two-page spread of a group of Gotham rogues facing off against The Dark Knight. In this issue, the power outage causes a similar incident, and we get a similar two-page spread. The new one is superior if for no other reason than he fixed the damn Riddler. In 2011, Capullo drew a ridiculous Riddler with question marks shaved into his head. This new one looks like the Zero Year version, and looks suitably reluctant to fight Batman (see thumbnails below).

We also get a quick appearance from The Joker in this issue. That was a nice nod to one of the better issues in the Snyder/Capullo run, as well as a reminder that he will be back sooner or later…

It was very fitting to see an appearance by the Court of Owls in this issue. Given time, and what other writers end up doing with them, I’d wager the Court of Owls will turn out to be a major part of Snyder and Capullo’s legacy on Batman and his world. Between the backstory, the look, and the creep factor, the Court of Owls have the potential to stand the test of time and be part of the DC Universe for years to come.

I’ve said it before, and I’ll say it again: I thought the look of Flappy Face Joker was stupid, I hated most of Zero Hour, and I can’t stand this team’s weird fixation on giant robots. But Scott Snyder, Greg Capullo, and everyone who worked on this Batman run were part of something special. Not perfect, but special in its own way. This team carved out its own era on one of the longest-running comic books in the history of the medium. And they sold a lot of books in the process. That’s something they can be proud of and take with them for the rest of their lives. Comic book fans are in debt to them for taking such good care of one of our greatest heroes.