For the past few years, I’ve been setting reading quotas for myself. In this instance, “reading” refers to traditional prose books and audiobooks rather than comics. Not because of the antiquated notion that comics and graphic novels don’t count as reading. I just think it’s healthy to have a balance of both. I use Goodreads to track and gamify it.

For better or worse, I’ve been reading Star Wars novels since the fifth grade. I won’t tell you how long ago that was, but yeah…it’s been a matter of decades, not years. While I’ve tried to phase them out at various times, they always come back. They’re like the Sith in that sense.

After all this time, instead of fighting the impulse to dive back into that galaxy far, far away, I’ve simply accepted that they’re a guilty pleasure of mine. Thus, of the 15 books I’ve read this year, eight are from the Star Wars Universe. That’s fair right? A roughly 50/50 balance.

Thanks to this lovely pandemic we’re experiencing, I’m one of the many whose had a chance to do quite a bit of reading. And so, in my standard Weekly Comic 100s format, I present to you a set of mini-reviews from my Star Wars selections in 2020. As you’ll see, I’ve made a point to differentiate between prose and audiobooks. I’ve also left out the Rise of Skywalker novelization, as I’ve said quite a bit about that already. (1, 2, 3, 4.)

I don’t know that I would call this a thrilling read, nor would I say it enhances the Rise of Skywalker viewing experience very much. The most notable thing it does is bring Wedge Antilles back into the fold for his blink-and-you’ll-miss-it cameo in the movie.

Still, Resistance Rising is well-written and provides a little bit of context for where the galaxy is at heading into Episode XI. No harm, no foul.

This wasn’t at all what I expected. The title and cover lead you to believe Thrawn commits all-out treason, pitting he and the Chiss against the Empire. That is not what we get. The “treason” in question is very subdued. You can barely even refer to it as that.

Timothy Zahn is one of the godfathers of the Star Wars novel, and will be returning to Thrawn with a new book later this year. While there’s no one more qualified to write the character than him, I can’t say I’ll be rushing to pick that one up. 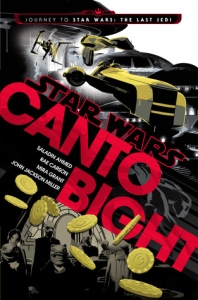 Kedpin Shoklop. That’s what I think of when somebody says this title. It’s the name of the main character in the first of the four novellas in this book. You can’t have a more Star Wars name than that.

My expectations weren’t particularly high or low for this one. But I’d call Canto Bight an overachiever. Especially because it’s based on The Last Jedi, which obviously wasn’t received in the friendliest of ways. It peaks early, but it’s still very much a worthwhile read.

Definitely one of the more enjoyable stories leading up to The Rise of Skywalker, as we meet a young Force-sensitive in the years prior to The Force Awakens. As you might have gathered, his abilities manifest in a very specific way.

While this is supposedly a one-and-done, Shinick manages to create enough intrigue with the that I wouldn’t mind at all seeing what happens to Kaz as the events of the sequel trilogy progress. 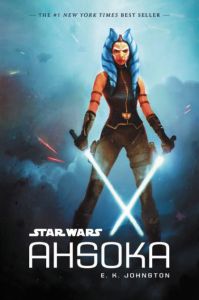 I heard the new season of The Clone Wars nullifies something in this book. That’s a shame, as this is one of the better books to come out of the new canon. It’s got an entertaining and action-packed story.

This is one of the few instances where I can definitively recommend listening to the audiobook, as it’s narrated by the actress that voices Ahsoka in Clone Wars and Rebels.

Is it a coincidence that both E.K. Johnston books are voiced by their corresponding Clone Wars actors?

Queen’s Shadow is something of an odd duck. The narrative has a strange flow to it. It’s an enjoyable listen, though. That’s an accomplishment, as Padme scenes can be famously boring. I liked it enough that I’ll be reading the prequel, Queen’s Peril, when it comes out next month.

This one is more or less what you expect it to be. Which, if you picked it up for yourself, is to say it’s what you want it to be.

We’re with an 18-year-old Han not-yet-Solo. We see a couple of the formative events in his life. Namely the evolution of his relationship with Qi’ra and the first time he experiences space travel. Han also has a nice supporting cast in this book, which is cool to see. Another little oddity about this book? It takes place mostly on one planet: Corellia.