I’m currently zipping through the final season of Orange is the New Black, as I imagine a great many people are. I’m not finished yet, but thus far they seem to be going out on a pretty heavy emotional  note. Several of them, actually.

Today I happened to look up Beth Dover, the actress that plays the Linda Ferguson character, on Instagram. One of her posts led me to Victoria Haigh, an amazing fan artist with an obvious love for the show. Dover used the image at left on her page, which reminds me a lot of the ensemble images Kevin Maguire does.

For an added dose of astonishment, check out Haigh’s web site. You’ll find not only more Orange, but lots of Kate McKinnon, and she’s certainly no stranger to superheroes! 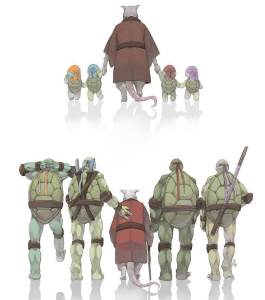 Naturally, emotions are running high. I spotted this piece by Puna Nezuki on Father’s Day. It smacked me in the feels then. But now…

What makes the image for me, outside of the quality of the character renderings, is the variance between young Splinter and old Splinter. The former standing up straight and tall in his early days of parenthood. The latter with a bit of a hunch, facing old age, but able to look around at a job well done.

Thankfully, I only have one to look after, as opposed to four. I’m also not raising them in a sewer. Truth be told, Splinter might be the most overlooked father in all of pop culture.

Naturally, there’s been plenty of buzz over the new Joker trailer. From where I’m sitting, it actually looks pretty good. Keep your expectations low with these DC movies, folks. Then at least you won’t be disappointed…

As it happens, the high visibility of the trailer gives me a chance to spotlight an artist I’ve had my eye on for awhile: Gabriel Soares. A 3D cartoonist from Brazil, Soares puts a lot of great detail into his work, while still keeping things in that exaggerated cartoon realm. Even if it’s only slightly so. To illustrate, I’ve included his takes on the Jack Nicholson, Heath Ledger, and Jared Leto Jokers. 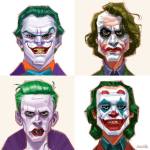 Soares’ work can be found on ArtStation, as well as his Instagram.

My favorite Robin costume is the original one from 1940. The “pixie boots” costume, with the bare legs and the yellow cape. It may very well be the the most illogically flamboyant costume in the history of superhero comics. Especially in the context of Batman’s world. But its become iconic as the decades have gone by, no matter how much certain creators have tried to sweep it under the rug.

That’s why I love this piece by Brazilian artist Marcio Hum so much. It shows us the character in what may currently be his most popular (not to mention outrageous) incarnation from Teen Titans GO! It’s a really fun contrast with the classic Robin. Plus, the pencil sketch background makes the costumes bright colors pop that much more.

Hum has drawn similar pieces for Cyborg, Starfire, Raven, and Beast Boy. They can be found on his Instagram. Hum is also the designer of Mini Co Collectibles. 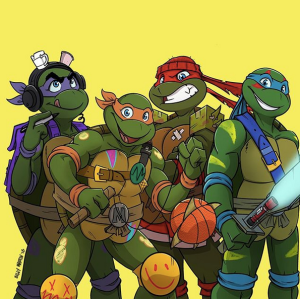 Outside of the initial buzz, I haven’t paid much attention to Rise of the Teenage Mutant Ninja Turtles on Nickelodeon. I have nothing against it, as it obviously breathes new life into the franchise and exposes the characters to a newer crop of young fans. But it’s just not my thing.

But this piece by comic artist Billy Martin? Totally my thing.

In the spirit of Halloween, Martin draws the Turtles from the ’80s cartoon show dressed as their counterparts from Rise of the Teenage Mutant Ninja Turtles. It’s a fun look at the contrast between the two designs, while at the same time keeping things playful.

Martin is no stranger to the boys in green, having done plenty of work on the more kid-friendly books at IDW. His official site can be found here.

As I’ve said before, I’m not normally into cutesy stuff. But Jeff Victor’s “Evolutions” series grabbed me.

Actually, cutesy is the wrong word. Cartoony would be a more accurate description. But the first work of Victor’s I saw was his “Pop Culture Evolutions” tribute to Leonardo of the TMNT. That one definitely has a cuteness to it, right?

It’s always fun to look back at the different variations of characters. Different looks, different incarnations over time, etc. Usually the longer they’ve been around, the more interesting it is. The Ninja Turtles are a great example, obviously. But you’ve also got characters like the Joker and Wonder Woman, movie monsters like the Xenomorphs, etc. Sometimes it’s even more fun with actors, and the wide array of personalities they’ve had to inhabit during their careers. Musicians have to evolve too. Few have evolved like Michael Jackson, of course…

Either way, Victor’s art is a lot of fun. He also does a lot beyond the Pop Culture Evolutions series. I’d definitely recommend checking out his official site, as well as his Instagram and Facebook pages.

Ah, the blessed naivete of childhood. When we were all blissfully unaware of what racist comments and family scandals would do to Hulk Hogan’s career. And while we may have had some idea that the Ultimate Warrior was raving lunatic, we couldn’t know just how weird it would get, or how low he would stoop.

But for ’80s kids the world over, Hulk Hogan and the Ultimate Warrior were, and to a large extent still are, childhood icons. So when they went head to head at Wrestlemania VI, it was like two superheroes facing off. And at some point, you had to make a choice. Which hero do you root for? Hogan or Warrior?

Everything great about the epic and flamboyant collision that was Hogan vs. Warrior is captured in the above piece by Matt Ryan Tobin. Is he the first artist to do the whole “Hulk’s opponent as the tearing shirt” thing? If so, I’m amazed it’s taken more than 30 years to make it happen. But even if he’s not, he’s clearly eclipsed any of his predecessors.

Everything about this just screams ’80s cinematic glory. From the way the figures are drawn and lit, to the lightning, even down to some of the typography. It actually looks like the art for a VHS tape box. Except old school WWF fans never had it this good back in the day!

More of Matt Ryan Tobin’s art, including a pair of epic TMNT movie posters, can be found on his official site. He can also be found on Facebook, Instagram, and Twitter.