Of his current run on Captain America, Rick Remender has said he was hoping to channel Jack Kirby and showcase Cap’s gutsy and noble spirit in a sci-fi environment. I’m not sure I expected things to get this sci-fi. But nevertheless, it works better than I ever expected it to.

Mere moments after being proposed to by his girlfriend Sharon Carter, Steve Rogers finds himself suddenly transported to a dimension ruled by the ruthless and sadistic Arnim Zola (a character created by Jack Kirby in the late ’70s). When Captain America escapes yet another one of Zola’s genetic experiments, he finds himself caring for an infant child rescued from Zola’s lab. Now, as he struggles to survive in a world he knows nothing about, Steve Rogers will know what it’s like to have a son. But despite his dramatic change in environment, Rogers will lives by a cardinal rule. A rule he learned from his mother while living as a poor child on the streets of Manhattan: When the odds are stacked against you, you always stand up.

When I opened Captain America #1, I had never been a huge fan. I liked him, and of course there was the obvious patriotic appeal, but the character had never connected with me on a personal level. This run by Remender and John Romita Jr. changed that. Despite the grand sci-fi setting, Remender injects a lot of great, relatable humanity into the story. The theme of Cast Away in Dimension Z is all about finding strength in the face of adversity and pain. It’s about finding the will to stand up, when it would be so easy to submit and stay down. That’s a pretty inspirational message coming from any character, but it’s especially so coming from Captain America. Amidst all the ridiculous chaos we see him facing in this story, he’s embodying what many believe is the true spirit of America. That’s a great thing.

While Remender and Romita are trying to channel Jack Kirby here, there’s more than a little Frank Miller to be seen here too. This book takes place over the span of about 11 years, so we get to see an older Steve Rogers who’s even more war-hardened than he was before. His bearded look, combined with the image of him running around with a kid, along with the way some of Zola’s minions look and speak, is very reminiscent of what Miller did with The Dark Knight Returns. The stories aren’t similar, but the the stories have a slightly similar feel. But then, given the involvement of inker Klaus Janson on both stories, it’s hardly a coincidence, is it? 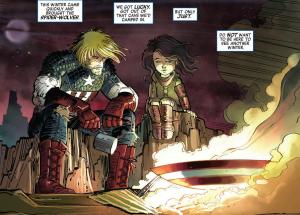 John Romita Jr’s gritty feel fits nicely with this story, given that much of it takes place in a bizarre wasteland. But once we get into Dimension Z, the real star of the book is colorist Dean White. Everything looks very faded, rusted, grimy and worn. This is in contrast to our flashbacks to Steve’s childhood in the ’20s, which are tinged with just the slightest amount of of sepia. It sets the mood and the tone perfectly for both settings.

Lest we forget, Cast Away in Dimension Z makes Steve Rogers a surrogate father to a young boy he names Ian. Hey Cap! Cap! Don’t do it, man! We’ve seen this episode! Mainstream superheroes do not have a good record with children, surrogate or otherwise. Aquaman’s son was suffocated by Black Manta. Superman lost his adopted son in the Phantom Zone. Wolverine ended up drowning his adult son. Let’s not even get into the two dead Robins that Batman has on his conscience. Heck, what about Captain America and Bucky? That’s been a rough road to travel in itself! But aw heck, the quiet scenes with Steve and Ian work pretty well, and Cap’s love for the kid comes off very effectively. So let’s go ahead and ride this train until the inevitable wreck…

Cast Away in Dimension Z does a great job of cutting to the core of Steve Rogers, and illustrating just what it is that makes him endure as Captain America. At the same time, it takes him out of his natural environment, and introduces some fresh elements. It’s not the best book we’ve seen from the Marvel NOW! initiative, but it’s definitely in the top tier.

Image 1 from marvel.com. Image 2 from brokenspinecomics.tumblr.com.