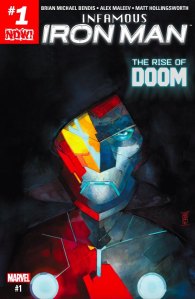 In the aftermath of Civil War II, Tony Stark is out of the picture. As Civil War II has been plagued by delays, we don’t know where Tony is, or what’s happened to him. But he’s gone. In his stead, the most unlikely of replacements will take up the Iron Man name: Victor von Doom. But why? More importantly, what is in store for the world now that Doctor Doom is Iron Man???

At face value, this seems to be another story about a bad guy trying to make amends with the world and become a hero. His motivation beyond that remains to be seen. But something’s clearly not right, as evidenced by his creepy scene with Tony’s former love interest Amara Perara. There’s an ominous vibe that seems to indicate things aren’t what they seem. He also makes it clear he’s taking on the Iron Man identity whether Tony (or at least a digital projection of Tony’s consciousness) approves. 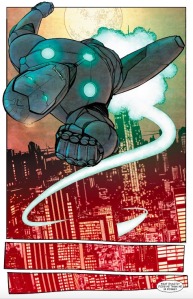 There’s also something going on with Doom’s mother. They bring her up at the start of the issue, and then we see her at the end. Looks like someone’s got some mommy issues…

Also, the Thing is now an agent of S.H.I.E.L.D. So Doom has a built-in first opponent, who he may face a soon as next issue.

Artist Alex Maleev and colorist Matt Hollingsworth let us know we’re squarely in villain territory for most of the issue. Their dark, sketchy, muted M.O. sets a grim tone worthy of Marvel’s most despicable villain. Even when we see Doom rescue Maria Hill from Diablo, it’s difficult to trust him as he’s shrouded in darkness.

Maleev’s rendering of Victor, whose face has been restored after the events of Secret Wars, is interesting. He maintains the suave and sharp look he had in Invincible Iron Man. But Maleev also humanizes him. Early in the issue, there’s a transition from a shot of the Doctor Doom mask, to the same shot of Victor. Male gives him a face slightly touched by age. Mike Deodato modeled him after Vincent Cassel in Invincible. But you can also see a little Peter Cushing (Tarkin from Star Wars) in Maleev’s version.

Doctor Doom is, among many things, delightfully complex. He’s as good a candidate as any to do the villain-becomes-hero routine. Our villain’s attempt to reform will inevitably crash and burn. Given this is Doctor Doom we’re talking about, that crash will undoubtedly be big, epic, and deadly. So for now, Infamous Iron Man has my attention.