There’ll be some debate as to whether Chalice, who we meet in Alters #1, is actually the first transgender superhero. But it almost doesn’t matter. For many readers, that’s exactly what she’ll be. This comic invites readers who’ve never read about a trans character. That’s a great thing. Alters has tremendous potential to expand the boundaries of inclusiveness in comics.

Charlie is a young man in the process of transitioning into a woman. He’s already begun hormone therapy, but his parents and two siblings aren’t aware yet. As if that wasn’t enough, he’s also an Alter, i.e. this universe’s equivalent to a mutant or metahuman. Since his powers have manifested, Charlie has made his public debut as the female superhero Chalice. But our heroine has already made an enemy of the tyrannical Matter Man, who demands Chalice surrender herself, or else. 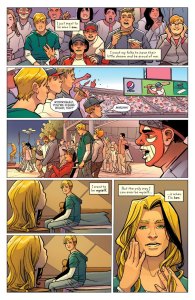 Like any debut issue for a series not connected to a mainstream superhero universe, it’s vital that Alters use these first several pages to make a case for itself. At this point, they just want to get you back next month, let alone a regular basis. To make their case, Paul Jenkins, Leila Leiz, and our creative team get pretty blatant with their storytelling. We get a scene where Charlie’s best friend checks out a girl’s ass. We get a scene where our traditional-looking American family goes to a baseball game (shown left).

We also get some lines that are a little on the nose, a la: “Did Charlie get his ass beat again? Bet you five bucks it was some chick!” Our characters have a tendency to use the words “boys” and “bro” when referring to each other. But to be fair, perhaps I’m noticing it more given our story.

I’m not sure if Jenkins is going for a theme about “costumes” here. But there’s something to be said for Charlie feeling uncomfortable in the body he was born in, but feeling truly alive and vibrant when either dressed as a woman, or decked out in female superhero gear. There’s also a great shot of the family at the baseball game, with a man in face paint in the foreground. Again, not sure if that’s a visual metaphor about the different “faces” people put on. But it makes all the sense in the world.

There’s still a lot we don’t know about the way this world works. We know the flamboyant Matter Man is a bad guy, gathering fellow Alters into his group. On the flip side we have the super genius Octavian, who seems to be sheltering Alters and studying their powers for the betterment of the world. Essentially, they’re this book’s Charles Xavier and Magneto. I can only assume they’ll be fleshed out as the story goes on.

The only negative I can hurl at this book from an artistic standpoint is that it gives us a case of “panel duplication.” Our introductory shot of Matter Man is later repeated during a big monologue toward the end. Not the biggest offense I’ve ever seen, but enough to merit a mention. I hate to do it, as Leila Leiz otherwise does a fine job here. Her characters move very naturally, and she’s not afraid to get provocative. Though not so provocative that it becomes exploitative. At times this book is, quite frankly, sexy.

Alters will get me back for issue #2. This series had a lot of great potential coming in. To its credit, it lived up to it. But so much more can be built. Hopefully this is the start of something special.