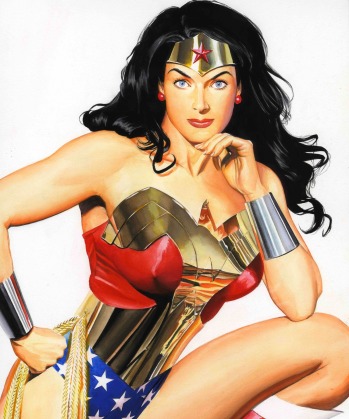 For a generation of fans and television viewers, actress Lynda Carter truly embodied the titular superhero on the classic Wonder Woman TV series, which ran from 1975 to 1979. So much so, in fact, that Alex Ross had trouble separating Carter from the character when developing his own take on Wonder Woman.

“What I identify Wonder Woman with (as does most of the public, if they think about it at all) is, frankly, Lynda Carter,” Ross said in Mythology: The DC Comics Art of Alex Ross. “She made the greatest single impression on the character in the 20th century – ironically more than any artist who drew her. In fact, Lynda Carter was so perfect, it was hard to come up with a good variation that wasn’t exactly her, but I had to.”

How much the public identifies Carter with Wonder Woman in the year 2023 is up for debate, especially now that Gal Gadot has played the role in a handful of major motion pictures. But Carter’s contribution to the character’s legacy, and just how perfect she was for the role, simply can’t be denied.

Years after the publication of Mythology, Ross would elaborate on Carter’s impact via a YouTube video…

Today is a big day for our favorite Amazon princess. Wonder Woman #750 has all the makings of an amazing tribute to the character and her legacy. It promises tales from various points in her career, featuring epic talents like Greg Rucka, Gail Simone, Marguerite Bennett, Jesus Merino, among so many others.

For Alex Ross, the classic never dies. Not just in terms of their looks, but their origins. So it’s no surprise to hear his enthusiasm for Diana’s classic origin in the video below.

I’d also like to note this is the first time I’ve heard this sculpted-from-clay story referred to as a “virgin birth.” I don’t think he’s intentionally trying to evoke a comparison to the birth of Christ. But they do have that element in common…