I’m not a huge gamer, though I’ve been known to dabble. I dipped my toe into Mortal Kombat vs. DC Universe back in the day. Not really my cup of tea.

What was my cup of tea? The special collector’s cover for the game, drawn by Alex Ross… 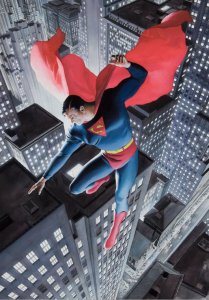 Every creative person lives with mistakes, or work they don’t necessarily look back on fondly. To an extent it seems counter-intuitive to think of Alex Ross in such a light, as he’s in such a league of his own among comic book and superhero artists. But indeed, the man is vulnerable to the same things any artist is. Case in point, in Mythology: The DC Comics Art of Alex Ross, he’s very critical of the lithography pictured at right. Gorgeous though it may be, Ross is quick to critique his rendering of Superman’s head.

In the latest video from his YouTube channel, Ross talks about living with certain insufficiencies and failures in his work. I’ve juxtaposed it with a video from two years ago, in which he talks about the importance of completing work. As a former journalist, I can very much identify with turning in work you’re not 100% satisfied with. But a deadline is a deadline, and sometimes the bullet simply has to be bitten.

By Rob Siebert
Doesn’t Have a Green Lantern Ring. Wants One.

Thanks to the COVID-19 pandemic, these days so many of us know so much more about isolation. Often times there’s nothing worse than simply having time to sit and stew in your own thoughts…

I got my Justice issues out recently. The 2005 maxi-series, written by Alex Ross and Jim Krueger, with pencils by Doug Brainwaite and paints by Ross, is essentially Ross’ giant love-letter to the classic Super Friends vs. Legion of Doom premise. All the various Justice League members face off against some of their greatest rivals who’ve all teamed up to take them down.

Part of Justice sees Sinestro trap Hal Jordan/Green Lantern in a black void that’s more or less outside the jurisdiction of the Guardians of the Universe. Jordan’s ring tells him he’s “outside the Guardians’ vast knowledge.” In other words Hal is alone, and no one’s coming to help. He may be on his own for eternity. Literally.

I’ve included some pages from Justice #3, #4, and #5. This is hardly the whole of Hal’s story. But it’s enough to give you a taste, and an idea of what happens to him.

This story is one of the elements of Justice that has always stayed with me, primarily because of that fifth page. Hal is so desperate for human connection of any kind that he asks his ring how he can create people with a will of their own. People, “who I don’t control? Or don’t disappear the moment I’m no longer looking at them.” The ring’s only and repeated response? “I do not understand the question.”

As long as we’re on the subject, here’s Alex Ross talking about the Silver Age version of the Green Lantern costume:

“There’s a unique aesthetic value to the Hal Jordan Green Lantern that sets him apart from all the other heroes – he wears green, and he has brown hair while everyone else has blonde or black hair and blue eyes. And the white gloves – a superhero withwhite gloves? But it works, and it translates beautifully to the aliens of the GL Corps. You can put any life form in that suit and it’s instantly recognizable. Gil Kane’s costume design is perfect.”

By Rob Siebert
The 5th Turtle

It’s easy to compare Marvels to another seminal Alex Ross work at DC years later, Kingdom Come. The stories themselves aren’t that similar. But the main character in both is essentially an average Joe seeing all this colorful superhero stuff from the ground level.

The Norman McCay we meet in Kingdom Come is an old man. But in Marvels, we follow Phil Sheldon the late ’30s into the mid-’70s. So we see the majority of his life play out alongside the evolution of the world of Marvels.

By Rob Siebert
Not An Artist. At All.

You know what’s sad? Alex Ross drew better as a seven-year-old than I probably could as a 30-something-year-old.

Still, we all did this, right? Those of us who were into superheroes, anyway. We’d get a pencil and some crayons and go to town. I have vivid memories of sitting down and drawing Batman and Robin, the Power Rangers, the Ninja Turtles, etc. It’s just that Alex Ross took things several steps further.

That’s why he is who he is.

Considering he draws characters that look and feel so realistic, it’s a little surprising to hear Alex Ross say that his work, and superhero comics in general, aren’t about practicality or realism. In the end, it’s about how it makes you feel. Which is what all art is about, really.

Ross says something in the video below that really jumped out at me. It’s about superheroes having a “lightning of spirit.” That’s perfect. I love that.

Last week was a big one for Jessica Drew, a.k.a. Spider-Woman. Her new #1 hit the stands. A quite enjoyable start to a new volume, if you ask me.

As you can see, Alex Ross is no stranger to Spider-Woman. In Marvelocity: The Marvel Comics Art of Alex Ross, he offered a bit of insight into the character, as well as the history of Marvel’s other female heroes…

“I love Spider-Woman. Marvel’s lineup of heroes in the 1960 was not strong on female leads. There was the Wasp and Invisible Girl and Marvel Girl, but they were reflections of their male counterparts. … Spider-Woman and She-Hulk were created in the 1970s simply to establish the copyrights to their names, but I think the characters have gone on to transcend that.”

Apparently, the Spider-Woman costume is one of Ross’ favorites to draw.

“Even though I felt her costume design was largely unrelated to Spider-Man’s (aside from the eyes), she was so attractive to me as a kid.”

If you’re a comic book geek and haven’t heard the name Neal Adams, you haven’t been paying attention in class.

Alex Ross credits Adams as one of his early influences, and it’s easy to see why. Adams is widely credited with revolutionizing comic book art. Specifically in the late ’60s and early ’70s when he worked with writer Denny O’Neil on characters like Batman, Green Arrow, and Green Lantern.

As Ross tells it…

Today is a big day for our favorite Amazon princess. Wonder Woman #750 has all the makings of an amazing tribute to the character and her legacy. It promises tales from various points in her career, featuring epic talents like Greg Rucka, Gail Simone, Marguerite Bennett, Jesus Merino, among so many others.

For Alex Ross, the classic never dies. Not just in terms of their looks, but their origins. So it’s no surprise to hear his enthusiasm for Diana’s classic origin in the video below.

I’d also like to note this is the first time I’ve heard this sculpted-from-clay story referred to as a “virgin birth.” I don’t think he’s intentionally trying to evoke a comparison to the birth of Christ. But they do have that element in common…

In the wake of Marvels X #1, I’ve been reading up on all things Earth X. In looking for more info and background on this alternate Marvel Universe, who better to look to than the man himself?