We open on Aiyon having a nightmare about the final battle thousands of years ago. We then see him take a brief walk through Dinohenge, where he runs into Zayto.

Random: Does Dinohenge have a kitchen? How about a laundry room? It Zayto and Aiyon obviously live there, so it must. Is it weird that I want to see them?

Aiyon says that combining their two new Dino Keys can form the Cosmic Dino Key and open “portals to anywhere in the universe.” I was going to file that little factoid away for future reference. After all, you can’t just say something like that and not travel through the universe. But it turns out, I didn’t have to wait long at all…

The Rangers discover that the zords linked with their new keys are located on the planet Nibyro. Using the Cosmic Dino Key, they open a portal to take them there. Zayto is quick to rush through said portal, saying they need those zords. On any other show, that would make him an idiot. After all, he doesn’t know anything about the planet’s atmosphere, gravity, etc. But this is Power Rangers, where every planet in the universe is just like Earth. Heck, way back in Forever Red they walked around on the moon like it was nothing. So I guess Zayto gets a pass.

In his attempt to use the Morphin Grid to power his machine, Void Knight uses Reaghoul, the monster who brought Lord Zedd back to life, to resurrect Boomtower. Our returning general seems to remember everything from before the Rangers destroyed him. So that begs the question: What does Zedd remember? Perhaps it all depends on what period of your life Reaghoul opts to reincarnate you from.

I really wish the two raptor zords seemed more distinct. But all these zords are just…oatmeal. They all blend together. 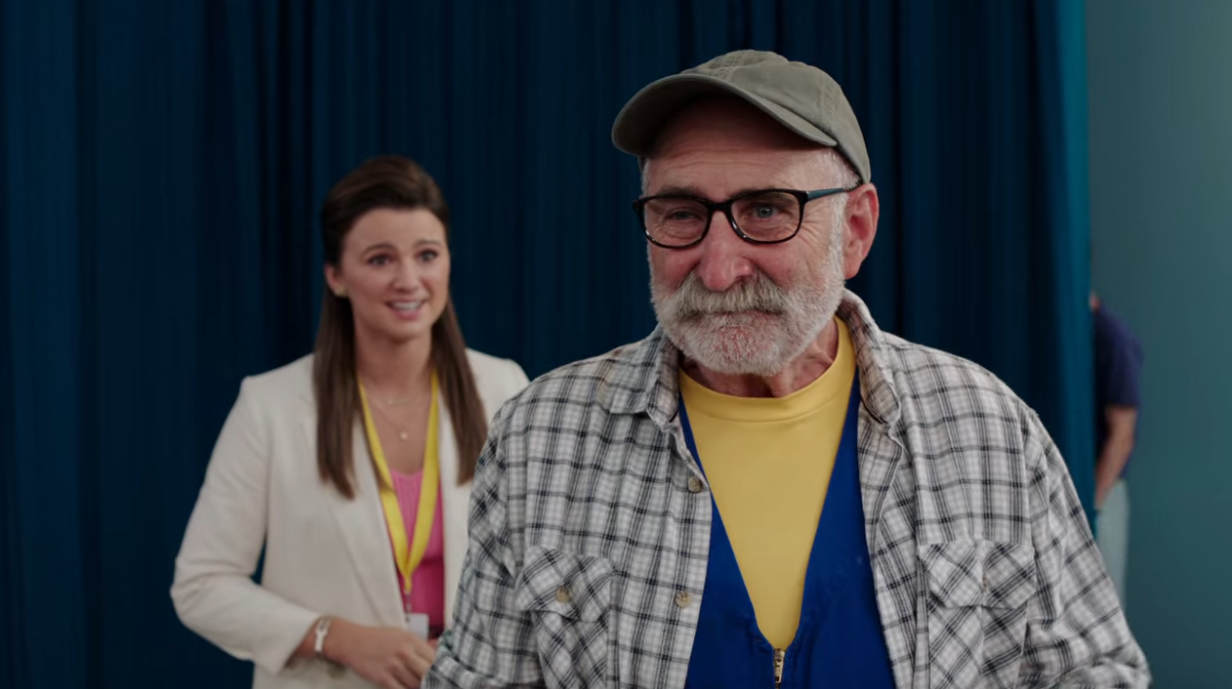 In the Power Rangers universe, there’s a legendary pirate named “Purple Beard.” That sounds about right.

J-Borg is a host at Buzz Blast? I thought she was just an assistant for Jane. And yet, I love how the woman she’s interviewing doesn’t bat an eye at being interviewed by a cyborg.

Our monster for the episode is Boneswitch, a monster that can swap people’s bodies. He demonstrates his powers on Slyther and Mucus, and then later swaps Zayto and Amelia, as well as Ollie and Javi.

I think they missed a cool acting opportunity in this episode. They could have had Campbell Cooley and Torum Heng, the voices of Slyther and Mucus respectively, impersonate one another’s characters, and then had the Ranger actors impersonate one another. It would have made for a lot of fun. Mighty Morphin Power Rangers did an episode like that in its first season. 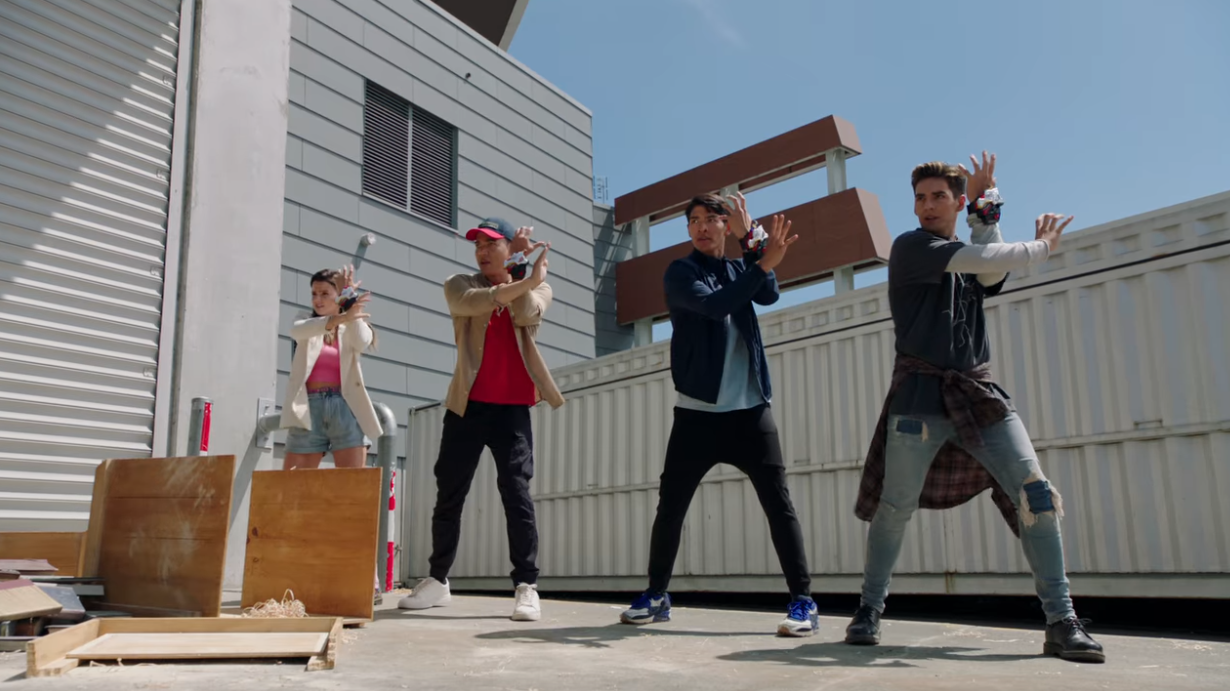 Instead, they had Slyther speak with Mucus’ voice, Zayto speak with Amelia’s voice, etc. Lame. Even lamer? Pop-Pop apparently doesn’t realize that Amelia has a different voice. A male voice.

I did chuckle a bit when Aiyon got body-swapped with a pigeon. Corny, but amusing.

When the Rangers are body swapped, they can’t link to the Morphin Grid. At least not with their own powers. So they have to swap powers along with their bodies. I scratched my head at that one a little bit. But I suppose it’s fair enough.

Seeing the Mosa Razor Zord leap out of the water and grab Boneswitch was one of the cooler zord moments I’ve seen in the show’s recent history. Certainly the coolest one in Dino Fury thus far.

Early in the episode we meet Aiyon, another Rafkonian, and the one behind the Gold Ranger helmet. And for some reason, he’s in Earth civilian clothes. So…where did he get those? I guess it depends on how much time has passed between this episode and “Storm Surge.” Maybe he stopped by an outlet mall on the way to Dinohenge or something?

Zayto and Aiyon are supposedly best friends. But when Zayto discovers that he’s alive after all this time, he isn’t overjoyed to see him. And keep in mind, he’s also been actively searching for any evidence that Rafkon, or someone from Rafkon, is still out there. So we’ve got a double whammy of good news here, and instead he’s solely focused on the disagreement he and Aiyon had literally millions of years ago. I don’t buy it. 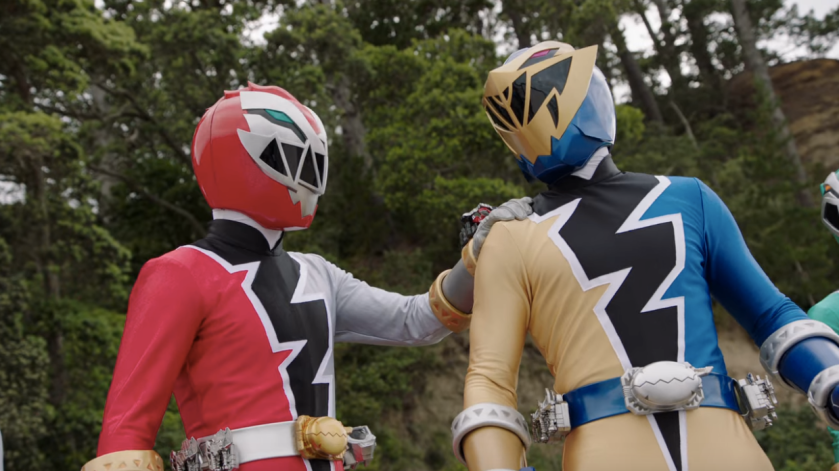 We see that the Green Morphin (spelled without the g) Master awoke Aiyon from his slumber after being led there by the Nexus Prism. Why the Green Morphin Master as opposed to a different one? No explanation. Though one isn’t necessarily needed. More importantly, our green friend tells Aiyon, “Without you, Lord Zedd will reign again.” Thus adding a little more credibility to the theory that Zedd will be the main villain next season.

Aiyon reveals that not only were the Sporix Beasts created on Rafkon, but that Zayto could have stopped their creation by voicing his objection. So naturally, he’s got trust issues with Zayto. And yet, a short time later during battle, Aiyon asks him, “You got my back?” That’s an odd contradiction.

How can you tell I’m an old school Mighty Morphin Power Rangers buff? This stuff with the Megazord not being able to fight underwater, and then being saved by the Mosa Razor Zord made me think of “An Oyster Stew,” the final episode of season one. The Rangers faced an almost identical dilemma there.