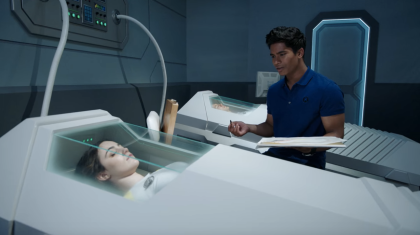 Ravi being scared to share his painting hobby with his mom doesn’t necessarily track for me, given what we saw in “Tuba Triumph.” I get that the two situations aren’t necessarily the same. But the moral is more or less the same, isn’t it? Not being ashamed of who you are, what you love, etc.

We’ve seen Ravi look longingly over the comatose body of Roxy (the real one, not the avatar) a few times now. Makes me wonder…is anybody longing over Blaze? I mean, he’s there too, right?

These Beast Bot centered episodes don’t do as well with me. For my money, things would have been a lot more interesting if one of the other Rangers had discovered Ravi’s hidden talent. Granted, then you wouldn’t have the whole memory erasure thing to get the plot moving. But it might have been a little more relatable.

I can only imagine what it’s like to act alongside a robot gorilla with a steering wheel on its face. You won’t see that on any other show…

Note that when Ben and Betty get messy at the end of the episode, they’re laughing with the Rangers, as opposed to being laughed at. That’s a big difference between modern PR, and what we saw with Bulk and Skull back in the ‘90s.