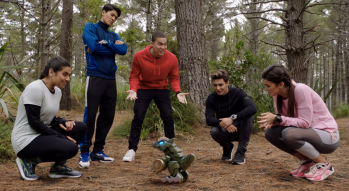 The balloon exercise Zayto had the team doing at the beginning of the episode was another nice look at the Rangers in training. It was creative and a good visual.

The Pacha zord wanders into the scene, and the Rangers learn it’s shrunk over millions of years. I don’t love the idea of a zord, even a tiny one, just wandering around the city waiting to be found. Isn’t that what Pokemon do? I’ve never been a Pokemon guy, so I don’t even have a clue.

Still, I almost wouldn’t mind Pacha staying small and acting like a pet for the Rangers. Why the heck not, right?

Hold on a minute, zords can reproduce? Like, that’s literally the line Ollie said. “Zords can reproduce.” Can we define “reproduce” for our purposes? How does that work exactly? I’m not even sure I buy it… I dig the Smash Battle Armor. It looks tailor-made to make toys out of. Almost like the Power Rangers equivalent to Hulk Hands. Doesn’t look like they make ’em, though. Seems like a missed opportunity.

I will say though, that once they got into the zord fight, they went a little too heavy on the boxing bit. I’m mainly talking about these two giants fighting in a boxing ring made up with power lines in the middle of the city. A little too much for my taste.

Santaura, our mysterious woman who’s been in stasis, finally wakes up at the end of the episode. Great closing shot with the eyes popping open, the contact lenses, etc. I was originally hoping they’d close the first season with a shot like that. But it’s every bit as effective here.