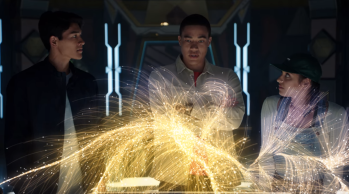 So the best thing they could come up with for Slyther’s memory-tampering amulet was a steering wheel? Aw c’mon, prop department…

The T-Rex Cosmic Megazord makes the Dino Fury team one of the more travel-capable teams we’ve ever had. Obviously it can open portals to the far reaches of space and different dimensions. But who knows what else it can do, or where else it can go? The possibilities are intriguing.

“No, my dignity!” was one of Slyther’s more amusing exclamations. He’s like the villainous equivalent to Izzy in that he always gets the best lines. Really cool to see Void Knight mix it up with the Rangers, albeit briefly. That’s not always something you see from a lead villain. Also, it puts him over as a formidable opponent.

It’s interesting to me how the monsters in Dino Fury, like Wreckmate and Occulo, stick around for awhile. They aren’t simply destroyed in their debut episode, monster-of-the-week style.

I found myself legitimately intrigued by the mystery of what happened to Rafkon. It’s not often an entire planet disappears, after all.