Let’s not bury the lede: This episode ends with the revelation that Izzy, played by Tessa Rao, is the Power Rangers franchise’s first LGBTQ Ranger. She walks off hand in hand with Fern, played by Jacqueline Joe.

It’s tough to look at this as anything but a positive. Though I suppose if one were fishing, one could chide the franchise for taking so long to have an LGBTQ Ranger. But let’s look on the bright side. This is a happy moment. And I’m happy it’s the Izzy character that gets this distinction. Unlike a lot of Rangers we’ve seen over the years, she’s got spunk and personality, both via writing and performance. Izzy represents the community well.

I maintain that the more diverse the Power Rangers cast is, the stronger it is. That’s not strictly a race or a color thing. It also applies to things like family structure, economic background, religion, or in this case sexual orientation. The days where three out of five Power Rangers are straight white kids should have been over a long time ago. Thankfully, Dino Fury reflects that. 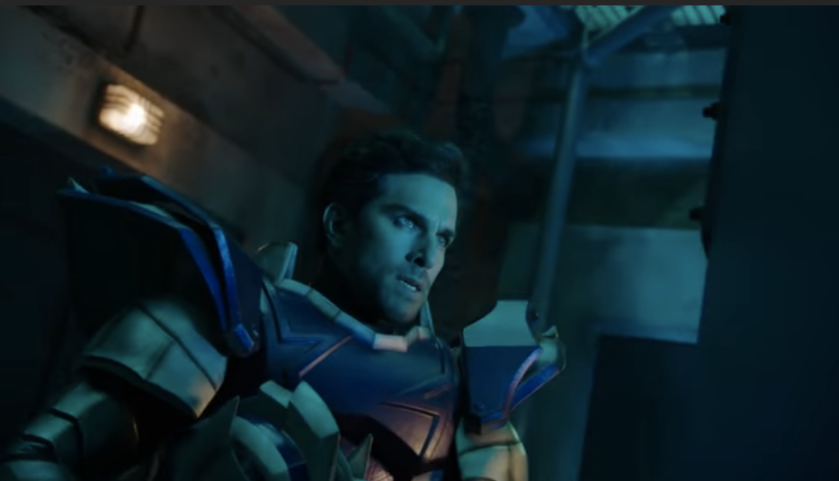 When the monster is disguised as Adrian, he recites a poem to Izzy that’s written on a scroll. As in, “Hear ye! Hear ye!” It made for a funny visual.

Another funny visual? Zayto disguising himself as an old lady. Very Mrs. Doubtfire.

Utterly buried by the subject of Izzy’s sexuality is this episode’s other revelation: Void Knight is human (shown above). Knowing how monsters work on this show, he could have been just another big suit creature. But him actually being human definitely adds to his whole tragic villain vibe.

Mucus turning into slime during the spat with Void Knight was a nice touch. Or perhaps not slime. But, well…mucus.