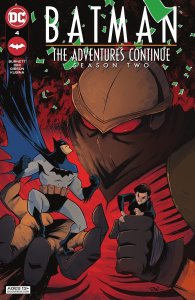 Did I miss an episode? This issue depicts Renee Montoya as being anti-Batman. I don’t think she was ever that way on the show…was she?

This issue is nicely self-contained. Though it fits into the overall narrative of the “season.”

Jordan Gibson is our artist this time around. He mimics that DCAU style perfectly, to the point where I could easily mistake his work for that of Ty Templeton or Rick Burchett. In this case, that’s fairly high praise.