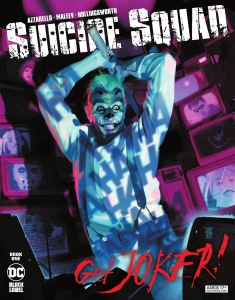 This story should be happening in the main Suicide Squad book. A story about the team going after the Joker is a nice way to draw in fans of the movie, even if the team line-up isn’t quite the same.

Azzarello is a good fit for the Squad He turns in something that, again, I would argue is better than the main series. It’s gritty, it’s violent, it’s witty. It’s the way the Suicide Squad should be.

How has the Red Hood not been on this team before? Frankly, he fits it like a glove.