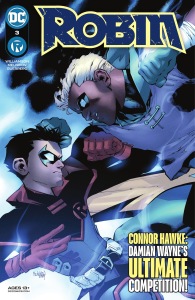 I’m completely unfamiliar with the post-New-52 version of Connor Hawke. (Is this the first time we’re seeing him?) But evidently, he’s still Green Arrow’s son. In this issue he and Damian have a nice little bonding moment over their daddy issues. I’m not sure how old Connor is supposed to be. But he’d be a nice replacement for Jon Kent as Damian’s best friend.

Three issues in, and Damian’s gray Robin costume remains an acquired taste. Though I will say it’s probably a better fit for this particular story than the more traditional one would have been.