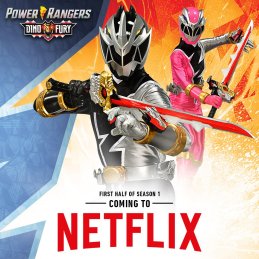 Episodes 9, 10, and 11 of Dino Fury are the first episodes of Power Rangers to premiere on Netflix, along with the eight episodes that had already aired on Nickelodeon. I’m curious as to why those last three episodes hadn’t aired beforehand. Still, it makes for a nice little mini-binge.

What’s more, apparently season two of Dino Fury will be exclusive to Netflix. As someone who’s been having a lot of fun following the series on a week-by-week basis again, I’ve got mixed feelings about that. But you certainly can’t argue with the distribution Netflix has. And if it turns out to be good for the show overall, then I can’t complain. It may just take some getting used to.

When the Rangers realize they’re cut off from their tech, Amelia says she’ll “call the old fashioned way,” and goes to find her smartphone. As an adult fan who was around before the age of the iPhone, that line makes me feel old.

So the premise is that the Rangers are “miles from the city,” and can’t teleport in case Void Knight launches an attack. I appreciate that Zayto brought up the fact that they could walk there, despite how long it would take. I was ready for them to simply stay stuck in the forest until they found a solution.

They literally built a giant crossbow to fire Ollie’s arrow at the big tech-blocking balloon. Pure insanity, and I kinda love it.

Based on their interaction in this episode, I’m convinced we’ve got an Ollie/Amelia romance coming our way. I mean, why not?

So…where was Zayto going with the “Why did the chicken cross the road?” joke? Especially if he didn’t know what the punchline was? Not the most important detail in the world. But it’s nagging at me.

Right before the zord battle starts, Ollie says that the bird monster is about to be “all out of cluck.” *cringes* Really? You sure about that?

One thought on “Power Rangers Dino Fury, “Cut Off” Review”