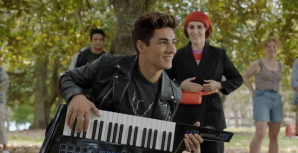 The very first line in the episode is, “What’s the haps, Solon?” Is that really a thing kids say? I thought it was just Sam Roberts.

Izzy: “I feel like I’ve been massaged by a truck.” How very specific. Izzy continues to get the best lines.

Solon finds a “viral video” of Javi’s dad taking his new keytar away from him. What’s the title of that video, I wonder? “Keytar Kid’s Dad Acts Like a Dick,” maybe?

So when Javi plays music it amplifies his “Ranger energy,” prompting a response from the dormant zord they’re looking for. Fair enough. By Power Rangers logic, at least. If the Dragonzord could be summoned by playing a flute, why not a Stegosaurus?

I thought Boomtower was a goner. But the big guy lives to fight another day.

I was happy they didn’t quickly resolve the issue between Javi and his dad. There’s enough meat on the bone there to make that season-long story arc between the two of them.