***This year marks the 10-year anniversary of IDW Publishing’s Teenage Mutant Ninja Turtles series. In celebration, we here at Primary Ignition will be looking back at the book as a whole. For some, this has emerged as the definitive version of the TMNT. Here is why…*** 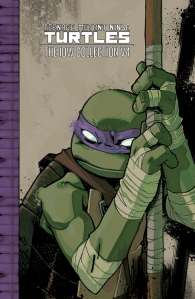 I don’t usually go for what I call, “Cutesy Turtles,” i.e. the boys in green drawn in a cute and cuddly style. That’s not to say the Turtles shouldn’t have softer, gentler moments. But remember, the Turtles are martial artists. They’re ninja. They’re warriors. They should look ready and able to fight at any given time

Sophie Campbell provides a unique and rare exception to that rule. I’d classify her take on the Turtles as cute. But there’s also a sensitive quality to her take that made it perfect for the four-issue “Northampton” story arc in IDW’s TMNT series.

The whole “retreat to a farm” plot point dates back to the original Kevin Eastman and Peter Laird comic book and has been adapted into various TMNT media over the years. It always involves the Turtles recovering after getting beaten down by the Foot, and eventually making a triumphant return to the city. The IDW series presented it with a new twist: Leonardo recovering after being brainwashed by the Foot. It wasn’t just a matter of recovering from a beat down. It was about coming together and healing as a family. 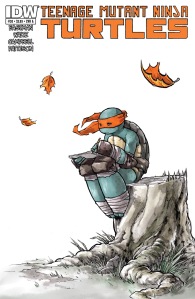 I think one would be hard-pressed to debate that Campbell’s art in these issues has a cute quality to it. But there’s more to it than that. This is as emotionally transparent and as vulnerable as the Turtles have ever looked. Part of that is because of the “softer” look Campbell gives them. Another part involves her decision to draw them with eyeballs, as opposed to the white slits many artists use, eyes being a “window to the soul” and what not. The general autumn aesthetic of “Northamption” plays a role too. Campbell and colorist Ronda Pattison’s greater emphasis on fall colors is a subtle message that we’ve got a front row seat to a time of change and transformation in these characters’ lives.

From a writing perspective, it’s interesting to pay attention to each individual Turtle during these issues. TMNT #30 in particular. Each brother deals with the blows they’ve been dealt in his own way. Michelangelo narrates the issue via a letter to Woody. Thus, he reaches out to others while expressing himself creatively. Leonardo desperately seeks guidance from a mentor, in this case his mother (more on her in a moment). Raphael, perhaps predictably, seeks out confrontation with Alopex, who is on her own journey of self discovery. Understated but no less important is Donatello’s emergence as a healer. We see him tend to Splinter’s wounded leg and act as a friendly ear for Leo. This emphasizes that his contributions to the Turtle clan go far beyond that of a simple Mr. Fix-It.

On the subject of healing, not to be lost in the shuffle is April O’Neil, and her role in the saga of the Turtles. We learn in “Northampton” that her father, now disabled after suffering a stroke, was once a scientist who had a hand in testing and developing the mutagen that transformed the Turtles and Splinter into their present state. The O’Neil family will later learn that the “ooze” in question has miraculous healing properties. That’s a new spin on the green goo that’s become synonymous with the TMNT over nearly three decades. More than anything else, it opens up some interesting storytelling doors… 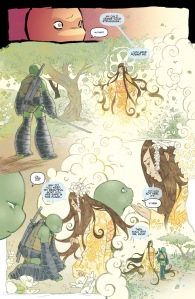 The Turtles have always had a father figure in Master Splinter. But rarely if ever had there been a maternal figure in the story. Historically, the closest thing to one came in the form of Tang Shen, who we’d see via flashbacks as a love interest for the future Splinter, Hamato Yoshi. She would always meet a bloody end thanks to the Shredder.

In the IDWverse, Shen is cast not only as Yoshi’s beloved wife in feudal Japan, but the mother of their four sons. Centuries later, Yoshi is reincarnated as Splinter, and his sons return as four turtles. Shen, on the other hand, becomes a spectral presence, and for the first time has a role in the ongoing story of the TMNT. We saw her briefly during “City Fall,” and we see her once again during “Northampton.” Campbell and Pattison’s presentation becomes downright tender, and also brighter during Shen scenes (shown left). Fittingly, it also has a bit more of an Asian influence. It’s a unique visual, seeing this woman behave in a motherly way with these anthropomorphic animals. And needless to say, her relationship to the Turtles and Splinter is unlike any we’ve seen in the series.

Family continues to be one of the central themes for the book heading out of “Northampton,” into issue #33. The relationship, or lack thereof, between Casey Jones and his father, now the massive brute called Hun, takes centerstage. Present since the very first issue, this plotline is one of the more prevalent byproducts of presenting a younger Casey Jones. In other media, the character has almost always been a grown adult. Making him college-aged allows us to see not only a young man whose identity is still forming, but a character that’s often much more vulnerable than our traditional hockey-mask wearing ass kicker. And thus, more interesting. The downside? A jacked up dude in a hockey mask is a lot more intimidating and formidable than some teenager walking around with golf clubs and a hockey stick.

The truly tragic element of the Jones family story is that by this point in the series, Hun does actually want to help Casey. He wants to do what, in his mind, is best for his son by giving him a bunch of cash and sending him off to start a new life for himself. All the while, Hun would be staying in New York working for Shredder, the man who stabbed Casey and put him in the hospital. Hun may want what’s best for his son, but it’s clear where his loyalties are. And when Casey refuses his offer, we get an all too grim look at just who Arnold Jones has become.

Issue #33 also sees Mateus Santolouco return on pencils and inks. My complaints from last time about Santolouco’s Turtles looking too inflatable and puffy still stand. But oddly enough, his renderings of Slash, another mutant turtle, are perfectly fine. Granted, Slash is a different species of turtle, and is larger than our four boys in green. He also has an entirely different texture to his skin, which Santolouco draws beautifully. All Santolouco’s mutant characters (the four Turtles notwithstanding) are very charismatic and expressive. Not just Slash, but Old Hob, Pidgeon Pete, the Rat King, among many others. So it becomes that much easier to get invested in these characters and their world.

And yes, I did say the Rat King (shown below). Another TMNT “legacy” character that’s appeared in various media over the years, his trademark is his ability to control rats. Naturally, that becomes a problem for Splinter. The Rat King of the IDWverse has a more supernatural, and frankly demonic quality to him. As one might expect, he’s hardly a one-off baddie, and has his place in the larger tapestry of this series. But for now, he simply puts Splinter and Leo through the ringer, content to play again another day… 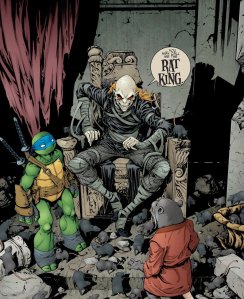 This portion of the book also lays a good amount of foundation for things to come. We spend more time with tech genius Harold Lilja, who we met in Donatello’s Micro-Series issue. There’s also Nobody, a vigilante/superhero who’s loosely the TMNT equivalent to Iron Man. She emerges when Angel, a friend of Casey’s and member of the Purple Dragons, dons a tech suit created by Harold.

Harold’s latest creation is Metalhead, a turtle-shaped cyborg and TMNT legacy character who’ll serve a purpose the likes of which readers will never see coming. I was impressed with what the IDW team did with Metalhead, specifically his “four-legged” battle mode.

Issue #37 and a portion of #36 see Cory Smith take a turn on artistic duties. Smith’s style is somewhat akin to what Ben Bates turned in during his time on the series, with a touch of Dan Duncan thrown in as well. It feels very familiar. As always, Pattison’s work brings a wonderful consistency to it all.

Smith gets the tall task of drawing the series’ first meeting between Shredder and Krang. Or at least the first meeting we’ve seen, as it turns out they’ve met before. I don’t love that approach, as I think it would have been much more interesting to see these two would-be dictators and forces for evil meet for the first time and size each other up. But what we get nonetheless has intrigue to it. They meet for what’s almost a business negotiation. As one might expect, things break down.

The four “Northampton” issues are the real selling point for this cluster of IDW’s Teenage Mutant Ninja Turtles. It puts our characters in a new environment and studies them during a period of vulnerability. It’s not a matter of the book dipping in quality. Rather, it’s about setting the table for things to come. And rest assured, big things are coming…