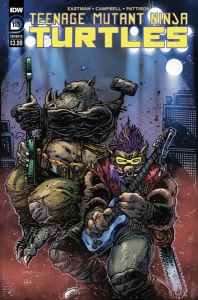 Wow. Apparently a lot can ride on a good ol’ fashioned battle of the bands. Like, a lot…

I imagined this Bebop and Rocksteady vs. Tokka and Rahzar fight would be pure comic book violence. But Campbell actually casts one side as sympathetic, thus skewing readers’ loyalties. Not the approach I expected. But I can’t complain.

You know what Sophie Campbell has turned this series into? The comic book equivalent of a young adult novel. Again, not the approach I expected. But I can’t complain.