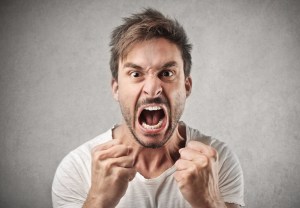 Anybody remember the Full House episode where Jesse (the John Stamos character) has to discipline his kids? They retaliate by calling him “mean daddy,” causing Jesse gets all self conscious and introspective.

Naturally, I saw that episode as a kid. But the closer I got to adulthood, and the more I thought about becoming a father, the more that story resonated with me. Of course, now that I actually am a father, it’s more relevant than ever.

Nobody wants to be the mean daddy. Everyone, of course, wants to be the fun daddy. That’s how I always pictured myself. Or at least the daddy that didn’t yell a lot. The daddy that kept his calm and composure in the face of his kids being upset and/or defiant. I looked at it as the Fred Rogers approach. On television, Mister Rogers never lost his temper. He was always serene, calm, and collected. That’s what I wanted to be.

But the other day, “mean daddy” showed up. Lil’ Primary Ignition, who’s about one and a half, wasn’t cool with having her diaper changed. As she was on the changing table, she started wiggling, bucking, and generally fighting me. I was already having a pretty bad day, and I wasn’t cool with her not being cool with things. So I raised my voice. You might even say I yelled.

The operative word was “Stop!” I must have said/yelled it four or five times. She’d been crying when I set her on the changing table. Now she was crying even harder. Not a hallmark fatherhood moment for yours truly. Mister Rogers would not have approved…

Then again, maybe he would have…

I think I need to stop thinking in terms of “mean daddy.” In that moment, I wasn’t needlessly harsh or cruel toward my daughter. I was angry. I let her know it, and she responded in the only way she knows how: She got more upset. It was a lose-lose situation. Next time, I can come into the situation a little bit wiser.

A few years ago, a parent friend of mine posted a Facebook status talking about a meltdown her toddler had in public. I replied that I was sorry she had to go through that. In return, she said something along the lines of, “It’s okay. Kids have a lot of feelings.”

Evidently, they aren’t the only ones.