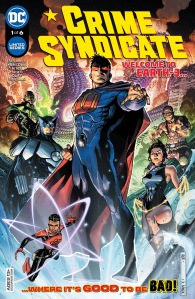 Ultraman, an evil version of Superman, uses the term “fake news” early in this issue. That feels right.

This issue does a nice job of introducing us to the Crime Syndicate characters. Ultraman in particular. The trouble with that is, if you’re picking up this book you probably already have a basic idea of what the concept is: An evil Justice League. I was hoping they’d find a way to hook us with an intriguing story or idea. No such luck.