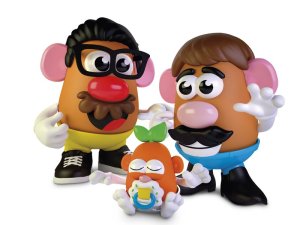 Somebody in my Facebook feed this morning referred to people getting freaked out over “an androgynous potato,” and I knew something was up.

Turns out Mr. and Mrs. Potato Head are rebranding. Hasbro is going to less prominently display the gender labels for the toy line. The brand will now simply be “Potato Head.” (See packaging below.)

This triggered some folks online, because that’s what the internet is and has always been for: Triggering people. How dare we cut Mr. Potato Head’s imaginary balls off! (What would you call Mr. Potato Head’s balls anyway? Spuds? Spudlings?)

My initial inclination was to say this is one of those things that’s been given way too much thought. Just how much will the world be improved by de-emphasizing the gender roles of toy potatoes? Is Hasbro fixing something that isn’t broken?

Then I read the AP story, in which Ali Mierzejewski, editor-in-chief at The Toy Insider says…

“It’s a potato. But kids like to see themselves in the toys they are playing with.”

The older I get, the more I understand the importance of representation in popular culture. It’s not just toys that kids project themselves on to. It’s all kinds of mass media and merchandise. Everyone deserves to feel seen, regardless of sexuality, race, or however you want to measure difference.

I find it usually helps to look at these things through the lens of fatherhood. Baby Primary Ignition has a pretty conventional family thus far. It’s mom/dad/baby. But I’d like to think that if it were mom/mom/baby, or dad/dad/baby, or if there were a gender-neutral “they” mixed in there somewhere, she’d still be able to look out into the world and not feel like she doesn’t belong. I’d want her to know her family is beautiful the way it is.

And if genderless plastic potatoes can move us further in that direction, I’m game.