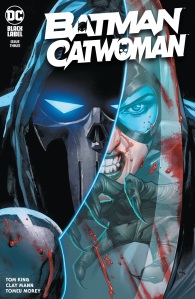 It’s Christmas time in this issue. I can only assume the pandemic delayed it, and it was supposed to come out in December.

I saw someone on Twitter describe the secret camaraderie that Catwoman and the Joker have as an “affair.” Joker makes an allusion along those lines in this issue. But it’s, y’know, a joke. Because he’s the Joker.  You could call the dynamic a lot of things. But not an affair. The word affair obviously implies sex. The Joker and Catwoman are not sleeping together.

At least they’d better not be…