Once is incidental. Twice is coincidence. Three times is a pattern. Or perhaps in this case, a tradition.

Call it the annual <i>Survivor Series</i> swap-out. When the WWE Championship abruptly changes hands during the build-up to Survivor Series to make the big champion vs. champion match more appealing.

In 2017, we were staring down the barrel of Universal Champion Brock Lesnar against WWE Champion Jinder Mahal. Because there was so little interest in the match, WWE had Mahal drop his title to AJ Styles a few weeks before the event.

In 2018, history repeated itself when the newly villainous Daniel Bryan took the title off AJ Styles. In both cases, Styles and Bryan went on to have show-stealing matches with Brock Lesnar.

This past Monday, history once again repeated when Drew McIntyre beat Randy Orton for the championship with less than a week to go until Survivor Series. And while we don’t have Brock on the show this year, there’s a good chance McIntyre and Roman Reigns will steal the show nonetheless.

Here are some more things… 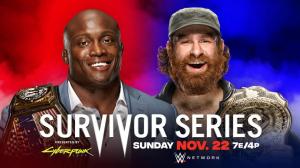 Most of these matches are pretty cold, as most of our opposing champions haven’t been able to interact in television by virtue of being on different shows. But this one? This is the coldest. Two heel champions, cut from very different cloth, squaring off in a match that, like most of these other matches, means little to nothing. The fact that the Intercontinental Title is now ugly as hell doesn’t help either.

Because of how hot the Hurt Business is on Raw, and the fact that dominance is kind of his thing, I’m picking Lashley to come out on top here. A loss won’t hurt Sami. Come to think of it, none of the losers on this show will be hurt that bad. That’s what happens when your pay per view matches are so inconsequential. 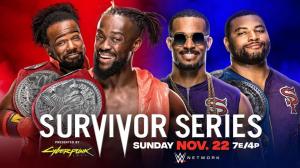 CHAMPIONS VS. CHAMPIONS:
The New Day vs. The Street Profits

I like this match.  I hated the way they swapped the Raw and Smackdown Tag Team Titles a few weeks back. But this match? All good.

My pick for this match comes down to, of all things, commercials. Recently, the Street Profits have been featured in ads for both Skittles and Head & Shoulders. That tells me the WWE promotional machine is firmly behind Dawkins and Ford. A win here might serve them well in that sense.

Mind you, the WWE promotional machine has been firmly behind the New Day for years. But hey, I’ve got a 50/50 chance here, right? 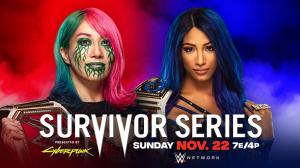 These two tend to deliver in big-match situations. So I’ve got high hopes for them here.

My logic on this one is pretty simple: When these two wrestled at Summerslam, Asuka won. So this time Sasha will win. Normally I’m against that kind of 50/50 booking. But because they’re both champions, it works out. The fact that we’re fresh off Sasha’s appearance on The Mandalorian doesn’t hurt her case either. 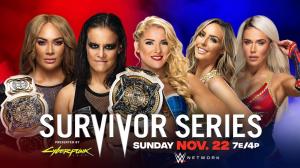 This match has been a mess. We’re still missing two wrestlers on the Smackdown side of things. Then, for whatever reason, on Monday they swapped out Mandy Rose and Dana Brooke for Lacey Evans and Peyton Royce. In terms of who’s winning this match, I doubt WWE even knows at this juncture.

First thing’s first: Who do you plug in on the Smackdown team? Peyton Royce’s presence on the Raw side makes Billie Kay an obvious choice. There’s also Bayley, who doesn’t have anything to do on this show yet. If all else fails, Natalya is also waiting in the wing.

The only big story coming into this match is the one between Nia Jax and Lana. The whole “Lana goes through a table every week” thing was an eye-roller at first. But it’s actually starting to grow on me. I’m thinking Team Raw picks up the win here, with Lana potentially being our sole survivor. Then, of course, Nia Jax will put her through a table.

Don’t discount the possibility of Jax and Lana facing off for the Raw Women’s Title at Wrestlemania. There’s enough time to make that happen… 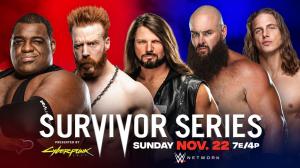 These Smackdown teams seem to be an afterthought. If they’re not even finished the week of the show, then it must not be that important who’s on them.

Depending on what happens in his match with Murphy this Friday, I wouldn’t be surprised if Seth Rollins winds up not being in this match. His real-life wife Becky Lynch is about to have her baby. So it obviously behooves him to be at home with her right now. His obvious replacement? Murphy.

It wouldn’t shock me to see Big E fill in that final spot on Team Smackdown. There’s also Apollo Crews, or even Rey Mysterio. They could even throw us a curveball and put Lars Sullivan in there.

This match is a toss-up. If Big E or Lars wind up in this match, it would make sense to put them over. But in the end, as more time and effort have gone into Team Raw, I think they’re a solid bet to win. I expect to see Keith Lee and/or Riddle standing tall by the end. 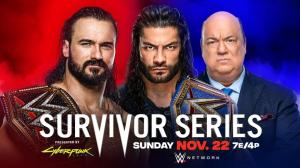 Roman has been doing some of his best work on Smackdown these past few months, and Drew will have been the WWE Champion for less than a week when this match takes place. So a loss isn’t ideal for either man. A double-disqualification, or some kind of non-finish in this match certainly isn’t out of the question. But if you held a gun to my head, I’d pick Roman to win over Drew. He’s the best villain WWE has right now. Going into Wrestlemania, it’s to their advantage to keep him as strong as possible.