Playing a little catch-up this week. With it being the week of the presidential election here in the United States, Lord knows it’s a hell of a lot more fun to be in a land of escapism right about now…

Has Black Mask ever had his mask ripped off his face? Because that happens in this issue, and it’s really the only notable thing about it. Oddly enough, we don’t really get a good look at his face without the mask. I imagine it looks something like raw hamburger meat.

I’d recommend the variant cover on this one. Harley gets center-stage, obviously. But it’s a pretty cool group shot. 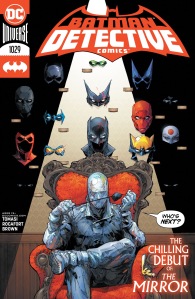 Still digging Kenneth Rocafort’s work. He and Tomasi won some sentimental points with me in this one by putting in a shot of the Batpoles, straight out of the ’60s Batman show.

Tomasi’s run on Detective has been notably disappointing so far. But he may very well turn things around with these next few issues. We’ve got a story about a mayoral candidate running on an anti-vigilante platform. There’ve been stories in that territory before. But I’m intrigued to see what Tomasi does with it.

I had started to write this “Planet Brainiac” story off as fluff. But in this issue we have a couple scenes where our robotic villain (who is not Brainiac) talks to both our heroes respectively about their motivations as heroes in attempt to understand them. If you’re a big fan of Superman and/or Batman, it’s not terribly insightful. But I like some of that stuff for more casual readers. I’d prefer we get it via storytelling as opposed to plainly stating it the way Williamson does here. But I give him points nonetheless.

We meet a character called “the Old Dragon” in this issue who has a really cool look. I hope to see more of him soon.

Not a very eventful issue outside of meeting this new character. Though we do get a nice back-and-forth between Erica Slaughter and our resident cop character. Tensions continue to rise. Despite some of my reservations about children and gore, I can’t deny Tynion, Dell-Edera, and Muerto have put together one of the most suspenseful books on the stands.