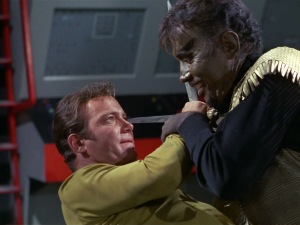 I’m starting to understand the general consensus about season three of Star Trek. Which is to say, it’s a pretty big step down from seasons one and two. That’s not to say these episodes don’t have their positive points, as we’ll see here. But in a way it’s fitting the first episode of this season was about Spock’s brain being removed. Because three episodes into season three, it feels like a piece of Star Trek‘s brain is missing. As if we now have a poor man’s Star Trek. I don’t think it’s a coincidence that happened at the same time Gene Roddenberry had stepped back to strictly an executive producer role at this point…

Thankfully, its heart is still there. “Day of the Dove” culminates with the Enterprise crew and the Klingons temporarily putting aside their differences to stop a special effects blob that feeds off their aggression and violence. Said entity is even capable of implanting false memories into its victims to trigger anger and hostility. To finally fend off their common enemy, Kirk and Klingon Commander Kang prompt their respective sides to laugh and act jovial together (shown below). 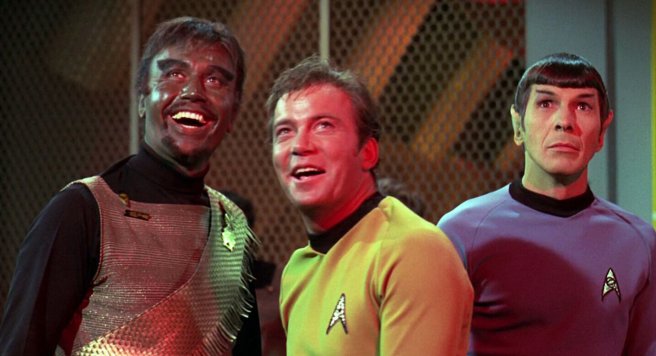 Look at Spock’s face in that photo compared to Kang and Kirk. God damn, Leonard Nimoy was so great. I’d put money on that acting choice being a Nimoy decision, as opposed to one provided by the script or director. Obviously, Spock wouldn’t be inclined to show the kind of boisterous emotion the others are. So instead, Nimoy keeps it subtle and smiles with his eyes. Brilliant.

The major problem with this episode, for my money, is that there’s no punch to the moment when Kirk and Kang finally decide to work together against the entity. It’s not, say, a dramatic life-or-death situation where in order to survive the two sides have to trust one another. Thus, for a brief moment, proving that peace between them is possible and something that can be worked toward. Instead, it’s this awkward (and in Spock’s case, funny) moment of forced laughter. There’s no gravity or tension there.

Granted, in its third season Star Trek underwent major budget cuts. So a large-scale battle between this coalition and some strange new alien force wasn’t in the cards. Even an established group like the Romulans would likely have been too much. But instead of bringing in all those extras in to be Klingons, could they not have dressed a few of them up in a different kind of costume to establish a third, more dangerous and hostile group? Take Susan Howard, who plays the Klingon woman in this episode, and make her the leader. Granted, hindsight is always 20/20. But that seems easy enough, right?

Heck, we’ve got a bunch of swords in this episode for whatever reason. How about a big sword battle between the two sides in some wide open space aboard the Enterprise?

On the subject of physicality, I did take a certain amount of guilty pleasure in the wanton violence on display in this episode. Specifically, Kang walking into a room and punching Kirk in the face without provocation. Then, of course, Kirk giving him his receipt later. There was also Kirk knocking Chekov around a little bit. Granted, Chekov was being influenced by the entity at the time…

But still, it was fun. Can’t deny that.