Apparently in the post-New 52 continuity, or whatever continuity we’re in right now, Clark Kent and Lana Lang haven’t been in touch for awhile. Though apparently she was still Superwoman at one point…

For a couple pages here, Ivan Reis gets to take on Clark’s Smallville days. That’s pretty cool. Less cool? He also draws the New 52 Superman costume. Though thankfully it looks less like armor.

I’ll be sad to see Bendis’ run on the Superman books end in December. He did right by the Man of Steel.

It continues to amaze me how this book is breaking the mold of what a TMNT story can be. What we’ve been getting lately is something more akin to a later issue of The Walking Dead. They’re trying to build a new society from the ground up.

Michaelangelo, for all intents and purposes, starts a Mutant Town podcast in this issue. That. Is. Genius.

“While you worry about the rules, real people are getting hurt.”

This is the first issue of Something is Killing the Children that I think went a little too far with the gore. We actually see a child get murdered in supernatural, yet still pretty brutal, fashion. I still dig the book at large, but that took me right out of the issue. 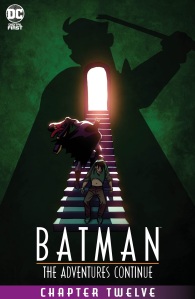 We start getting into the nitty gritty of what the Joker does to Jason Todd in this issue. Harley Quinn is written as having a problem with it. That’s the first move Burnett and Dini have made that I really don’t buy.

I love that for the flashbacks where Jason is Robin, they switched Batman’s costume back to the old Batman: The Animated Series design. Great little continuity touch.

All in all, I really like the DCAU spin they’ve put on A Death in the Family. And it looks like they’re about to stick the landing.