I’m starting to get a little weary of all this Drakkon-verse stuff. It works as part of a story where the Power Rangers go to a dark alternate universe. But as an island unto itself? Meh. As time progresses, it feels like all we’re doing is answering where this person or that person are in the Drakkon-verse. That’s not enough to justify a miniseries like this, in my view.

Then again, it must be selling. So what do I know?

The central story of “Joker War” has lots of intrigue. But there are little things that throw if off-balance. For instance, there’s a really cool moment where Batman has to fight a bunch of “Joker zombies” blind-folded. I love that. It’s a wonderful use of all Bruce’s training. But much like Joker’s facial expression at the end of last issue, a small detail taints it…

Batman says, “A good bat knows how to fight blind.”

Ugh. Why? Whatever happened to Batman being the strong silent type?

Also, why does Joker have abs?

Robson Rocha really gets to flex here with an beautiful two-page montage of some of the League’s most iconic moments. Beautiful work.

The narration in this issue is a little confusing. It takes some time to catch on to not necessarily who it is, but who they’re talking to. Still, you should catch on by the end. I love me a good Black Mercy story. So it’ll be interesting to see what they turn in here.

“Nice to see you two lovebirds back together, though. I’m sure rigor mortis has it’s advantages.”

These fashionable guys on the cover are “Lifers,” a group of religious extremists somewhat ironically opposed to the whole resurrection thing. They make for a nice bit of world-building. I like ’em.

Story-wise, this isn’t the most engaging book you’ll find. I’ve almost completely lost the plot. But Paolo Villanneli and Arif Prianto are killing it on the art. The opening page is beautiful. It’s got a gritty texture, yet is still as colorful as you want Star Wars to be. And of course, Lee Bermejo’s covers are awesome.

Vader basically gets swallowed by a whale in this issue. I mean, c’mon. You’ve gotta love that. A friggin’ whale!

In contrast, this story is trying to get a lot of mileage out of trotting out characters from prequels. As if we care that much what happened to Ric Olie. Don’t know who Ric Olie is? You’re not alone. There was a way to do this without scraping the bottom of the barrel. It might have only been a one or two-issue story where Vader simply visits Padme’s tomb. But sometimes, less is more. 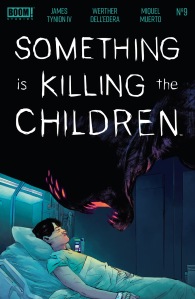 There’s a fantastic image in here that takes us into our first ever flashback scene with Erica Slaughter. She’s curled up in a cupboard, and one eye is staring straight out at the reader. That and all the deep blacks make it a really spooky shot.

Should this book count as a guilty pleasure? Because of all the…y’know…child death? Either way, I’m enjoying the hell out of it. It’s one of the best indie comics on the market right now.

I find it so amusing that Maxwell Lord, the character created for Justice League International, has evolved into such a formidable villain for Wonder Woman. And low and behold, he’s once again  casting her in an unfavorable public light.

Last issue, we were introduced to Diana’s new neighbor Emma, who I get the sense will be a civilian-level friend for her. Almost a Jimmy Olsen equivalent. I’m very curious to see how that evolves, as it’s not often we get to see Wondie have that kind of relationship.