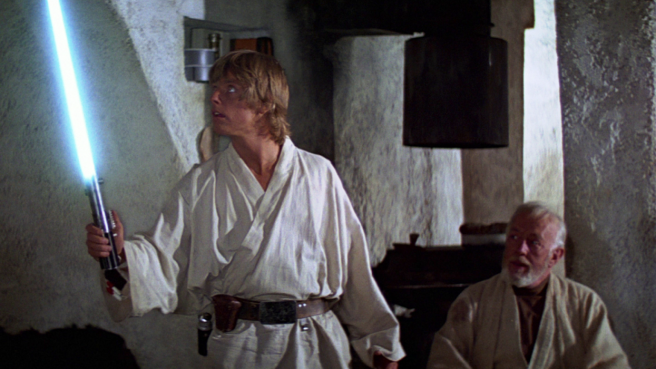 THE SCENE(S): We are introduced to Obi-Wan Kenobi, a wise old hermit living in the deserts of Tatooine who was once a Jedi Knight. He guides Luke Skywalker throughout the film, teaching him the ways of the Force.

GEORGE LUCAS SAYS (VIA THE STAR WARS: A NEW HOPE COMMENTARY TRACK): “Most of the characters in this follow the classic mythological archetypes of the [in the case of Luke and Obi-Wan] the young hero and … the old wizard, the old man, the wise companion. … There’s always a teacher. Someone who mentors the young hero in what his destiny is.”

I SAY: Lucas famously read Joseph Campbell’s The Hero With A Thousand Faces before writing the original Star Wars treatment. So he’s very much a student of mythological motifs, archetypes, etc. One of which is, of course, the wise mentor.

Likely the most common example you’ll find is Merlin, who mentored King Arthur. But you’ve also got Biblical characters like Moses or Elijah, or Norse mythology characters like Odin or Mimir. The Iliad also has the likes of Nestor or Chiron. More modern examples include Gandalf from the works of J.R.R. Tolkien, Albus Dumbledore from the Harry Potter series, and even Mr. Miyagi from The Karate Kid.

Of course, Star Wars is filled with wise sages. After Obi-Wan in A New Hope, The Empire Strikes Back introduced us to Yoda, and then Qui-Gon Jinn in The Phantom Menace. Years later, Luke Skywalker, Princess Leia, and Han Solo would all play a version of the role in the sequel trilogy.